Posted onJune 06, 2020
The rise of a humble grocer of Rewari to the viziership of the Sur empire was not by luck, but due to his loyalty, hard work and skills.

Hemu was the trusted confidant, prime minister and commander-in-chief of the Afghan king Adil Shah Suri, nicknamed Adali. He was the power behind the throne of Adil Shah.

Due to the civil war of Sur governors, Adil Shah lost most of his dominions. He made Chunar his capital. Delhi was under the possession of Sikandar Suri, another Sur pretender.

Hemu was so brave that he fought and won twenty two battles against the rivals of his master Adil Shah. 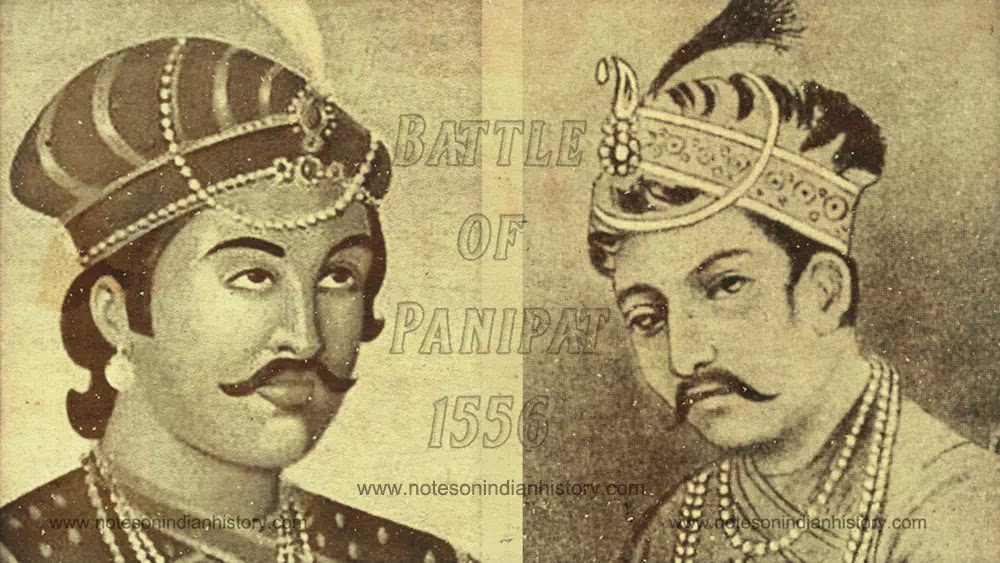 While Hemu was engaged in dealing with the Sur rebels Ibrahim and Muhammad Shah, Humayun defeated Sikandar Suri and recovered Delhi. Sikandar fled towards Punjab.


Adali was raising a strong force to carry on war against Humayun. At this time, he received the news of Humayun's death (January 1556).

Hemu was soon dispatched towards Agra with a large force and war elephants. Without offering any resistance Sikandar Khan Uzbeg, the governor, abandoned the fort and fled towards Delhi, which resulted in Hemu's occupation of Agra. Shadi Khan, another chief of Adali, engaged the Mughals at Sambhal under Khan Zaman Ali Quli Shaibani.

After occupying Agra, Hemu marched towards Delhi. At this time Hemu's enemy, the thirteen year old son of Humayun, Akbar, was in Punjab.

Prince Akbar was engaged in subduing Sikandar Suri with his guardian Bairam Khan in Punjab when he received the news of his father's death. Bairam Khan and other officers raised him to the throne.

When the news of Humayun's death reached Kabul, Akbar's rebellious cousin Mirza Sulaiman, the governor of Badakhshan, advanced on Kabul and besieged it.

The bulk of the Mughal Army was at that time in Kabul due to Mirza Sulaiman's rebellion. Delhi was then held by the Mughal governor Tardi Beg Khan. Tardi Beg sent express messages to the Mughal chiefs of the neighbourhood to come to his aid. The detachment under Ali Quli Khan Shaibani which was engaged in ﬁghting Shadi Khan at Sambhal was also on the way to Delhi to join Tardi Beg.

On 6 October 1556, Hemu reached Delhi and encamped near Tughlaqabad.

Many officers in Tardi Beg's army decided to wait for Mughal reinforcement from Kabul or at least for the detachment of Ali Quli. But finally they decided upon giving him battle and on 7 October both armies drew up.

The Mughal vanguard and their left wing broke and routed Hemu's vanguard and right wing and pursued them. Rai Husain Jalwani, the commander of Hemu's right wing, was killed, along with 3000 men. The victorious Mughals now turned to plunder.

At this juncture Hemu attacked the center of the Mughal army which was commanded by Tardi Beg, and smashed it. Unable to withstand the assault, Tardi Beg abandoned the battle and fled to Sirhind. Hemu, suspecting this to be treachery, didn't pursue the defeated enemy. When the Mughal wings returned to the battle field after the plunder, they saw that their center had disintegrated, and they retreated.

Victorious Hemu got possession of 160 elephants, 1000 Arab horses along with immense property and valuables.

With the capture of Delhi, Hemu became the de facto ruler of Adil Shah's dominions.

News of this disaster reached Akbar's camp on 13 October. Leaving a force under Khizr Khwaja Khan, the husband of Gulbadan Begum, in Punjab, to carry on the war with Sikandar Suri, he marched in person with Bairam Khan towards Delhi. At Sirhind, Ali Quli Khan and other defeated chiefs joined Akbar.


When they reached Sarai Karunda, a place near Karnal, Bairam Khan sent an advance guard under the charge of Ali Quli Khan towards Panipat. This corps was supported by another body of Bairam Khan's followers composed of Shah Quli Mahrum and others. Bairam Khan and the prince with the rest of the army followed them.

Akbar was kept at a distance of five kos from Panipat, with a select guard of 500 men.

Upon the news of Akbar's march, Hemu sent his artillery ahead of him under Mubarak Khan and Bahadur Khan towards Panipat, which was surprised and captured by Ali Quli Khan and others of the Mughal advance guard. 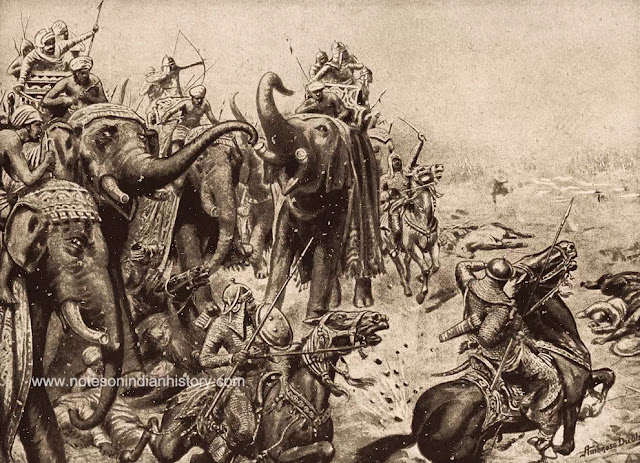 Hemu still had a numerically superior army 'as the locusts and ants of the desert' composed of Afghans and Rajputs. He relied especially on his well armed and trained elephants. Some of Hemu's officers were his relatives: Taharpal, Rajya or Ramaiyya and Bhagwan Das. To increase the zeal of his officers, he distributed among them treasure and land grants. He also gave them hopes of increase of salaries and promotion in rank.

Abul Fazl has given an account of Hemu's 'mountain-like and dragon-mouthed' elephants: Among them were 500 palmary elephants. 'Each one of those famous elephants was capable of disordering a large force. They were especially calculated to confuse the onset of cavalry, as the horses had never seen such terrific forms...They ruined lofty buildings by shaking them, and sportively uprooted strong trees. In the hour of battle and contest they lifted up man and horse and flung them into the air'.

These elephants carried musketeers and cross-bow men, clad in suits of mail and armour on their backs. The elephants had their trunks armed with spears and knives. They were placed in charge of experienced drivers: Ghalib Jang was assigned to Ḥasan Khan Faujdar; Gaj Bhanwar was assigned to Maikal Khan; Jor Banyan was given to Ikhtiyar Khan; Fauj Madar was assigned to Sangram Khan; and elephant Kali Beg, which had in many battles been ridden by Hemu himself, was on that day entrusted to Capan. 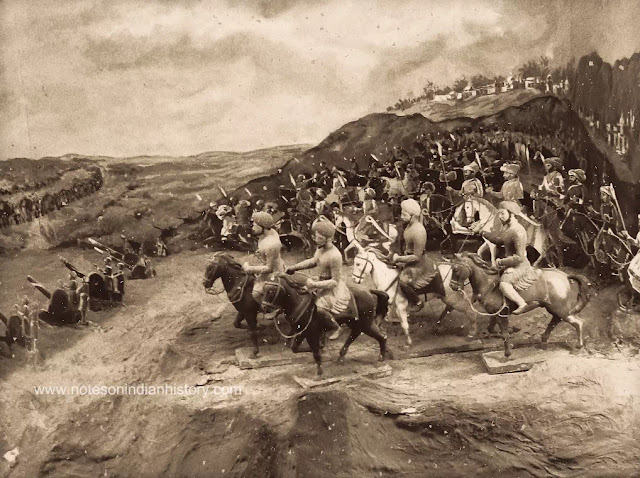 The advance guard of the Mughals drew up on the field of Panipat and waited for the attack of Hemu. Their right wing was commanded by Sikandar Khan Uzbeg, left by Abdullah Khan Uzbeg and the center was in charge of Khan Zaman Ali Quli Khan Shaibani.

Hemu's right wing was commanded by Shadi Khan, left by his sister's son Ramaiyya, while he himself occupied the center, seated on his elephant named 'Hawai' (the wind). 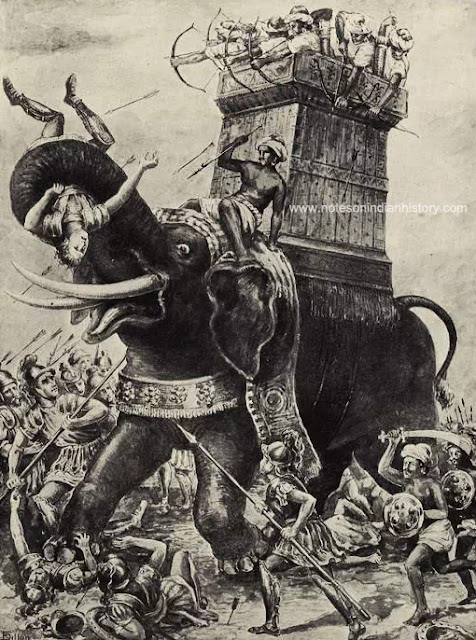 Both the armies stood in line in battle array on the plains of Panipat. The strength of Hemu's army was around 30000 horsemen and about 1500 war elephants. The smaller Mughal army had around 15000 men.

Bairam Khan moved in front of the ranks, and round the divisions, and took measures for preserving the rules of war, and the protection of points.

Swords and lances crossed. Hemu with his fierce war elephants made successive assaults on the Mughal army and their right and left wings were thrown into disorder. He now moved himself with the elephants towards the center against Khan Zaman Ali Quli Khan. The Mughal army began to shower arrows. According to Badauni ''Hemu in those circumstances, kept shouting his battle cry 'give and take' and also repeating a charm which he had learnt''.

Hemu was about to win the battle, but an arrow struck him in his eye, which decided the fate of the battle. Seeing this sight, his soldiers lost heart and began to flee. "But that valiant man, drew the eye out of the socket with the arrow; and, in that terrible condition, continued the fight with unequaled resolution and courage. He encouraged the few who remained by his side, and advanced through a bloody path which his weapons made", says Ferishta.

Unfortunately, there were no other men alive in his army brave enough to continue the fight. His ablest officers Shadi Khan and Bhagwan Das were already slain. Thus his army was defeated.

When Hemu's army became dispersed, the Mughals pursued and massacred them. They collected an immense booty. Shah Quli Khan Mahrum took the wounded Hemu prisoner to Akbar, where he was beheaded.

Was it Akbar who Killed Hemu?

A force under Pir Muhammad Sarwani was sent to Mewat. After capturing Mewat, they marched towards Deoti Macheri, where Hemu's father and relatives had taken shelter.

Hemu's father was taken alive and brought before Pir Muhammad who tried to change his religion, but the old man said, "For eighty years I've worshiped my God, according to this religion. Why should I change it at this time, and why should I, merely from fear of my life, and without understanding it come into your way of worship". At this he was put to death.

Hemu's widow escaped with elephants laden with gold and treasures to the jungles of Bajwara. She was pursued and a part of the treasure was recovered from her. The jagir of Mewat was conferred on Pir Muhammad.

No doubt, Hemu was one of India's greatest generals. It was Hemu's generalship which had so long preserved Adil Shah's position against his enemies. Ferishta remarks: "Hemu had certainly great abilities, notwithstanding his mean descent". "For on none of the former occasions was there a ruler of India, possessed of such courage, enterprise, and plan", states Abul Fazl. The only battle he lost was the battle in which he died.

Though, the true commander on the Mughal side was Khan Khanan Bairam Khan Turkoman, he too was absent from the battlefield. In fact Akbar had only a little role in this battle.

[Please note that the first image is actually a false representation of the battle.]

The second battle of Panipat marked the end of the Sur dynasty and the Mughal empire was re-established in India under Akbar.

A Short History of War Elephants:

Elephants had been used in war in India since at least the 4th century BCE. Specially trained and often protected by armor, they were mainly used to charge the enemy's troops, break their ranks, and spread panic and terror. Panipat was the first time that artillery and guns had been used against elephants. The results were devastating, and the use of elephants in warfare swiftly declined. (Battles That Changed History)

Himu, the Hindu "Hero" of Medieval India: Against the Background of Afghan-Mughal Conflicts By Sunil Kumar Sarker