Posted onJuly 19, 2019
Here we are discussing a brief history of Malwa after the Afghan conquest: The Afghan King Sher Shah Suri conquered Malwa in 1542 and conferred it on Shujaat Khan Suri. During the later years of Salim Shah Suri, Shujaat Khan rebelled and fled to Gujarat. Sometime after the death of Salim Shah, he re-occupied Malwa.

On this occasion, he divided the kingdom into districts; Ujjain was placed in the charge of his son Daulat Khan Ujala [the closest companion of Salim Shah]. Raisen and Bhilsa (now known as Vidisha) were made over to his youngest Mustafa Khan, and Sarangpur to his eldest son Malik Bayazid (Ahmad-ul-Umri). 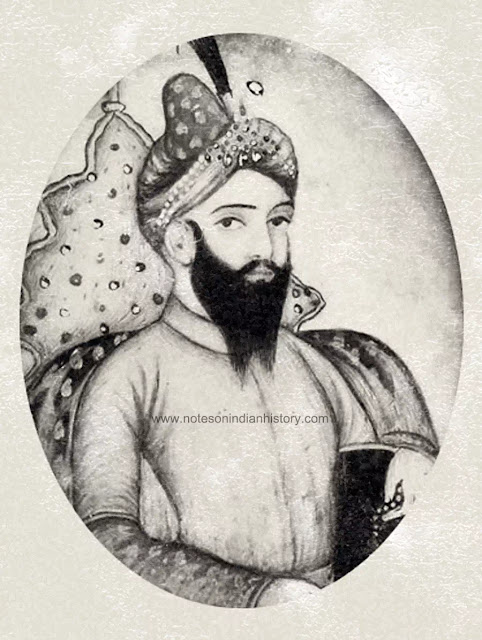 Mustafa Khan somehow escaped and took refugee with Rani Durgavati, the queen-regent of Gondwana. Pursuing him, Baz Bahadur invaded the Rani's kingdom. The Rani strenuously opposed him; his troops were totally destroyed and he took to flight.


Thereafter Baz Bahadur devoted his life entirely to pleasures; luxury, music, dancing and to the love of his beloved queen Rupmati. He passed his days in her company, abandoned himself to sensual pleasures and made over the affairs of the kingdom to his ministers.

[The first attack on Malwa was led by Bahadur Khan in 1560. He had advanced as far as Sipri (now Shivpuri), but he was recalled due to Bairam Khan's rebellion.] In 1561, Akbar sent his generals Adham Khan Koka (Akbar's foster-brother, son of Maham Anaga) and Pir Muhammad against Malwa. Baz Bahadur marched to Sarangpur to oppose them. The Afghan amirs who were vexed with him fled without giving fight. Baz Bahadur was defeated and fled to the forests on the frontiers of Khandesh. Adham Khan took possession of all the treasures of Baz Bahadur including Rupmati. She poisoned herself to avoid falling into the hands of Adham Khan.

Baz Bahadur Re-occupies Malwa: Adham Khan kept all the treasures of Baz bahadur with himself and sent only a few elephants to Akbar. This greatly offended Akbar. Adham Khan was recalled and the command of Malwa was given to Pir Muhammad.

Some time after his flight, Baz Bahadur set up a new army to fight against the Mughals. He had a fight with Pir Muhammad, but was again defeated. Pir Muhammad took Bijagarh from Itimad Khan, Baz Bahadur's general.

Flight of Baz Bahadur and Occupation of Malwa by Mughals (1562-1571): In 1562, Akbar sent Abdullah Khan Uzbek against Baz Bahadur. This time he fled to the hills without offering much resistance. Malwa was annexed to the Mughal empire in that year.

Baz Bahadur wandered in exile, and begged assistance from one state to another. He reached Baglan, where Bharji, the zamindar, provided him assistance. He also tried to seek the help of Changiz Khan and Sher Khan Foladi of Gujarat. But all his efforts were fruitless. He went further on to Deccan, where he passed one year in the service of Burhan-ul-mulk. Then he took refugee in the court of Rana Udai Singh of Chittor for some time.


At last, Baz Bahadur offered his submission to Akbar at Nagaur, after a reign of sixteen years. In 1571, Akbar sent Hassan Khan Khazanchi to bring him to court. Badauni says that he was imprisoned for some time. But later on he was made a commander of two thousand horse. He was among the 36 principal musicians in Akbar's durbar. Abul Fazl noted that,"a singer without rival".

"Baz Bahadur possessed such a dexterity in military exercises and archery, that before a ball of the Chaugan reached the ground, he shot seven arrows; and while the horse ran at full gallop, he loosened the string of the bow, used it as a horsewhip, put it right again, and discharged an arrow. He moreover excelled in music and composition", remarks Nimatullah.