Posted onFebruary 03, 2015
"Her tomb is still to be seen where she fell, in a narrow defile between two hills; and a pair of large rounded stones which stand near are, according to popular belief, her royal drums turned into stone, which, in the dead of night, are still heard resounding through the woods, and calling the spirits of her warriors from their thousand graves around her". (Sir William Henry Sleeman - Rambles and Recollections of an Indian Official) 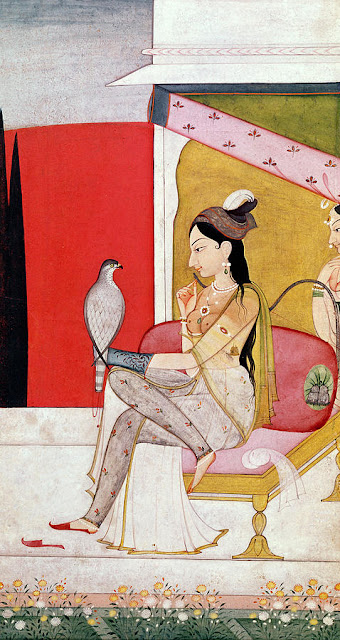 Chandel Dynasty is famous for building the Khajuraho group of temples of Madhya Pradesh. Rani Durgavati (1548-1564) was the daughter of the Chandel Rajput ruler Raja Salbahan of Rath and Mahoba and was married to Dalpat Shah, son of Sangram Shah, the Gond King of Garha Katanga, in 1542. Though Sangram Shah did not belong to a high tribe, Raja Salbahan was compelled to make this alliance as he was in bad circumstances (he was poor and weak). The kingdom of Garha Katanga was very rich with 70,000 flourishing villages. When Dalpat died in 1548, Rani Durgavati became regent of their five-year old son Vir Narayan and ruled the kingdom with assistance of two ministers, Adhar Kayath and Man Brahman. Chauragarh was her capital. The Rani was highly renowned for her beauty, courage and liberality and did great things by her farseeing abilities. She had 20,000 cavalry with 1,000 elephants. She successfully repulsed the attack of Baz Bahadur, the ruler of Malwa, inflicting heavy losses to his army. She was very good in hunting also; whenever she heard of a tiger, she never rested till she had shot it.

Khwaja Abdul Majid Asaf Khan was the governor of Kara Manikpur, which was near to the Rani's kingdom. When he heard of her wealth he thought that the conquest of it would be an easy matter. After getting permission from Akbar, Asaf Khan marched towards Garha with a large force. When the Mughal army reached Damoh (one of Rani's chief towns), Adhar pointed out the strength of Mughal army. She said, "It was better to die with glory than to live with ignominy. I have long ruled this country, and never acted in such a manner as to bring disgrace on myself. Now, from what you tell me, if the King were here in person, I would present myself before him; but now there is no remedy but war!". The Rani collected 2000 men and decided to fight. Her advisers told that it was proper to stay in some secure place until the forces are gathered together. Hearing this, she retreated to the jungles of Narrai. By this time Asaf Khan reached Garha and began to take possession of its territories. When he got news of Rani, he proceeded against her after leaving a force at Garha. On hearing of Asaf Khan's movements, she held a counsel and addressed to her people, "How long shall we take refuge among the trees and jungles?" and declared that either she would fall or she would conquer. She put armour on her breasts and a helmet on her head and mounted on her elephant Sarman. In the following battle both sides lost many men. The Rani was victorious and she pursued the fugitives.


At the end of the day, she consulted with her chiefs and sought their advise. Her opinion was to make a night attack on the enemy; otherwise Asaf Khan would seize the pass in the morning. But no one agreed to this proposal. As she predicted, in the morning Asaf Khan entered the pass with his artillery. The Rani came up with Sarman and prepared for the battle. Raja Vir also fought bravely; three times he repulsed the Mughal army but was seriously wounded. When the Rani heard this, she ordered some trusty men to take her son to a place of safety, but on this account, a large body of men went away from her.

Last Moments (24 June 1564): The Rani continued to fight bravely, suddenly an arrow struck her right temple. She courageously drew it out. The point of the arrow remained in the wound and it didn't come out. Just then another arrow struck her neck. She drew out that too, but became unconscious. When gradually recovered her senses, she realized that the battle had been lost. She said to Adhar (who was her elephant driver), "I have always placed trust and confidence in you against a day like this; so that, in the event of my meeting with defeat, you might not suffer me to fall into the hands of the enemy; act like a faithful servant, and dispose of me by this sharp dagger". He denied it and said, "How can I bring my hand to do this thing. How can the hand which has held your gifts do such a dreadful deed. This I can do: I can carry you away from this fatal field. I have full confidence in this swift elephant". Hearing these words, she became angry and asked him, "Do you choose such a disgrace for me?" She then drew her dagger and died a manly death. After this victory Asaf Khan marched against Chauragarh. Vir Narayan came out from the fort to oppose him, but was killed. All Rani's treasures fell into the hands of Asaf Khan. Rani Durgavati's reign lasted for sixteen years. 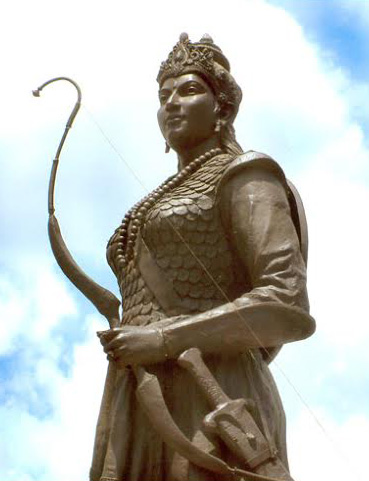