Posted onMarch 17, 2018
Sadashiva Raya ascended the throne of Vijayanagar empire in 1542. We have already seen how the young prince Sadashiva had escaped from the clutches of the ambitious regent Salakam Timma Raju and was later raised to the throne by the minister Rama Raya. Rama Raya, who at first acted as the regent, gradually became the de facto ruler of the kingdom. When the king Sadashiva attained maturity, Rama Raya confined him in prison. Caesar Frederick says that Sadashiva, the rightful king, was shown to his subjects only once a year. Rama Raya was murdered in the battle of Raksas Tagdi, popularly known as Talikota in 1565 and Vijayanagar was sacked by the Deccan Sultans. Thereafter Tirumala succeeded his brother in the regency of the empire. 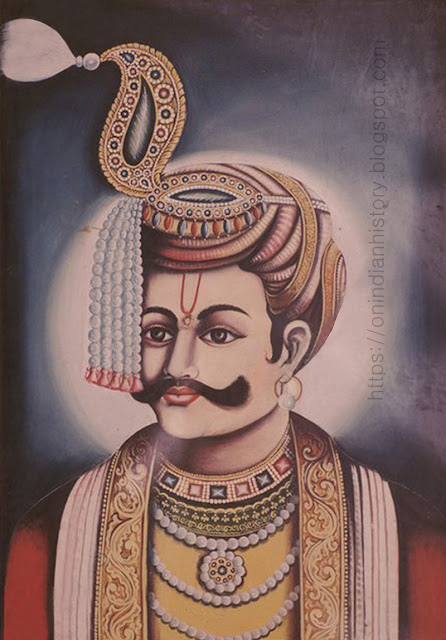 Account of Destruction of Vijayanagar Provided by Various Historians: According to Burhan-i-Maasir, the Sultans marched to Vijayanagar and spent there four months, destroying the temples and dwellings and utterly laying waste all the buildings of the country. Portuguese historian Faria e Sousa remarks that the destruction of the kingdom proved extremely hurtful to trade, which, in that year, was reduced to a very low ebb. He says, "The kings of Deccan spent five months in plundering the capital, although the inhabitants had, in three days, carried away 1550 elephants loaded with money and jewels to the amount of above one hundred millions of gold, and the royal chair for great days that could not be valued. Nevertheless, Ali Adil Shah found a diamond as big as an ordinary egg, on which the feather of the late king's horse used to be fixed; and another, though not so large, yet of an extraordinary size, besides other jewels of incredible value. After the aged Raja's misfortune, the kingdom of Vijayanagar was divided among his sons and nephews."

What happened to Sadashiva: As Frederick informs us, when the news of defeat and execution of Rama Raya reached Tirumala, he fled from Vijayanagar with his relatives, his wives and those of his brothers and sons, the ministers and nobles the generals and soldiers together with their king Sadashiva. "When the news came to the city of the overthrow in the battle, the wives and children of these three brothers (Rama Raya, Tirumala and Venkadadri), with their lawful king fled away, spoiled as they were, and the four kings of the Moors entered the city with great triumph, and there they remained six months, searching under houses and in all places for money and other things that were hidden, and then they departed to their own kingdoms, because they were not able to maintain such a kingdom as that was, so far distant from their own country." Tirumala returned to Vijayanagar and attempted to populate it after the departure of the Sultans. It seems that Sadashiva did not come back to Vijayanagar. Father Henry Heras observes that perhaps he was transferred to the neighboring fortress of Chandragiri, and either Venkadadri or Venkatapati (a son of Tirumala, the future emperor Venkata II) might have been his jailer.

Caesar Frederick, a Venetian merchant, visited Vijayanagar in 1567. He went from Goa to Vijayanagar in the company of two other merchants who carried with them 300 Arabian horses to Tirumala. He says, "Tirumala sent word to the merchants at Goa that if they had horses to bring them to him, and he would pay them well, and for this cause the aforesaid two merchants that I went in company withal, carried those horses that they had, to Vijayanagar. Also this tyrant made an order that if any merchant had any horses that were taken in the aforesaid battle, although they were of his own mark, that he would give as much for them as they would: and beside he gave general safe conduct to all that should bring them: when by this means he saw that there were great store of horses brought thither unto him, he gave the merchants fair words, until such time as he saw they could bring no more. Then he dismissed the merchants to depart, without giving them any thing for their horses, which when the poor men saw, they were desperate, and as it were mad with sorrow and grief."

Vijayanagar After the Battle of Talikota: Frederick stayed at Vijayanagar for seven months. He describes the kingdom of Vijayanagar thus, "The city of Vijayanagar is not altogether destroyed, yet the houses stand still, but empty, and there is dwelling in them nothing as is reported, but tigers and other wild beasts. The circuit of this city is four and twenty miles about, and within the walls certain mountains: the houses stand walled with earth, and plain, all saving the three palaces of the three tyrant brothers, and the pagodas which are idol houses, these are made with lime and fine marble. I have seen many kings courts, and yet have I seen none in greatness like to this of Vijayanagar, I say for the order of his palace, for it has nine gates or ports."

Transfer of Capital to Penukonda: After spending nearly two years at Vijayanagar, Tirumala shifted his capital to Penukonda. Caesar Frederick says that "In 1567, for the ill success that the people of Vijayanagar had, in that their city was sacked by the four kings, the king with his court went to dwell in a castle eight days journey up in the land from Vijayanagar, called Penukonda." According to Chikkadevaraya Vamsavali, the capital was transferred from Vijayanagar on account of the constant attacks of the Mohammedans.

Hussein Nizam Shah died shortly after the victory in the battle of Talikota and was succeeded by his minor son Murtaza Nizam Shah. Ferishta says that Ali Adil Shah, conceiving this a favour­able opportunity of extending his dominions on the south, moved with an army to Anegundi, in order to place Timraj, the son of Rama Raya, on the throne of Penukonda, and to depose Tirumala; hoping, by degrees, to acquire for himself a portion of the territory of Vijayanagar. Tirumala wrote to Khandaza Sultana, who was ruling the kingdom during the minority of her son Murtaza Nizam Shah, for assistance. Khandaza Humayun herself marched at the head of an army against Bijapur, accompanied by her son, upon which Ali Adil Shah was compelled to retreat from Anegundi.

Sometime after this, Ibrahim Qutub Shah invited Tirumala to form an alliance with Murtaza Nizam Shah against Ali Adil Shah. But Khandaza Humayun, demanded a large amount of money for becoming a part of the allies. Tirumala, who rather expected that the allies would restore the countries taken by Ali Adil Shah from Rama Raya instead of applying to him for money, sent a message to Ibrahim Qutub Shah, informing him of the circumstance. Ibrahim Qutub Shah immediately deputed a person to wait on the Queen-dowager, expressing his astonishment at this unexpected demand; and observing that it appeared very impolitic, in the present posture of affairs, to make demands of money on Tirumala, instead of conciliating one who was a useful ally at the head of ten thousand men, and who had reason to bear great enmity towards the powerful state which they were on the point of attacking. Instead of attending to this remonstrance, the demand was again urged by the Queen with threats; and Tirumala not only refused to pay the money, but prepared to treat the allies as enemies. Thereafter both armies retreated to their own countries.

In 1568, Ali Adil Shah took the fortress of Adoni, which was then in possession of one of the principal officers of the late Rama Raya, who, on the death of his master, had assumed independence.

In the year 1568, Sadashiva Raya received the homage of many feudatory chiefs. At the request of Krishnappa Nayaka, the ruler of Madura, Sadashiva made a gift of the village of Krishnapuram and nine other neighboring villages to the god Venkatesa.

In the opinion of Robert Sewell, it was Tirumala who murdered Sadashiva Raya. According to Frederick, the son of Tirumala, put to death the lawful king Sadashiva Raya. "The son of this Tirumala had put to death the lawful king which he had in prison, for which cause the noblemen in that kingdom would not acknowledge him to be their king, and by this means there is many kings, and great division in that kingdom." We are not sure if Sadashiva had any sons. With him, ended the Tuluva dynasty in 1569. Father Heras suspects that it was Venkatapati also known as Venkata II, son of Tirumala, who murdered the imprisoned sovereign. After the assassination of Sadashiva, Tirumala Raya (1569-1571) ascended the throne of Vijayanagar at Penukonda in 1569, and established the Aravidu dynasty.
Share
Post a Comment
Labels#Vijayanagar
Newer
Older