Mongol Invasions During the Reign of Ala-ud-din Khilji

Posted onAugust 09, 2018
Ala-ud-din (1296-1316) was the greatest ruler of the Khilji dynasty. In his reign more than five Mongol invasions occurred, but due to his effective administrative measures, none of them turned harmful.

The first Mongol invasion took place only a short while after Ala-ud-din's accession. In 1297, Duwa Khan of Mawar ul Nahr (Transoxiana), sent an army under his general Kadar to invade Hindustan. Ala-ud-din sent his brother Ulugh Khan against them and the two armies met at Jaran-Manjur. In the following battle, the Mongols were defeated. A large number of them were slain and many others were taken captive.


In 1299, the Mongols lead by Saldi and his brother, crossed the Indus and seized Siwistan (Sehwan). This time Zafar Khan was sent against the Mongols. Zafar Khan recaptured the fort of Siwistan, and came out victorious with the use of sword and axe only. He then captured Saldi and his brother, their wives and children and sent them along with other Mongols to Delhi.

Malik Hizabr-ud-din Zafar Khan was the Aariz-ul-Mumalik and governor of Samana. According to Yahya, his real name was Yusuf and he was the sister's son of Ala-ud-din. On account of his consummate generalship and bravery in this battle with Saldi, he became famous throughout the country, which invoked jealousy as well as fear of both Ala-ud-din and Ulugh Khan. Barani says that Ala-ud-din was thinking of ways to get rid of him; one of his plans was to send him to Lakhnauti; another was to put him out of the way by poison or by blinding. But he was prevented from this measure by a third invasion of the Mongols.

Towards the end of 1299, Qutlugh Khwaja, son of Duwa Khan, invaded Hindustan. This time their intention was to conquer Delhi. They avoided plundering till they reached the vicinity of Delhi. They encamped at Kili near Delhi and commenced a siege. The whole country, in terror of the Mongols, crowded into the capital. The crowd became so great that the streets became impassable. As the grain and provisions were blocked, a dreadful famine began to rage. Ala-ud-din Khilji pitched his camp at Siri and prepared for the battle. But Malik Alau-l mulk, (the uncle of Ziauddin Barani) the Kotwal of Delhi, advised him to refrain from engaging the Mongols.

Ala-ud-din addressed to the amirs and maliks, "It is nonsense to hide yourself from detection when stealing a camel; and in like manner to hold the sovereignty of Delhi and yet hide behind a camel's back as you suggest. If I were to follow your advice, to whom could I show my face? how could I go into my harem? Of what account too would my subjects esteem me, and what daring and boldness would the rebellious and disaffected see in me to make them preserve their allegiance to me? O Alau-l mulk! I have confided you the post of Kotwal, and the charge of my seraglio and treasures, together with the whole town. Whichever of us, whether he (Qutlugh Khwaja) or I, prove the conqueror, salute the victor with the keys of the gates, and of the treasures, and lay them before him, and become his obedient servant and vassal". 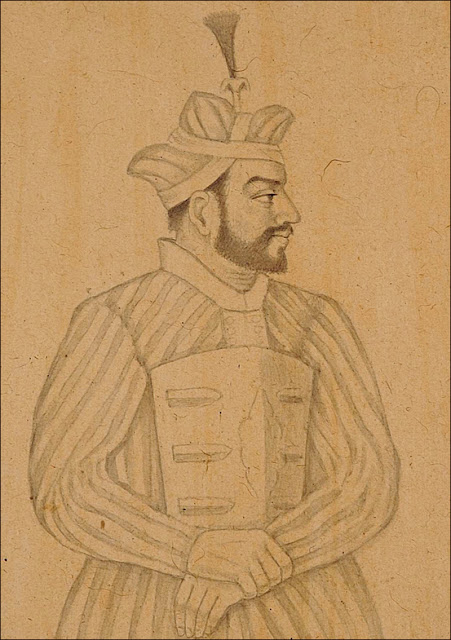 Ala-ud-din afterwards marched to Kili with his army. He entrusted the command of his right wing to Zafar Khan and left to Ulugh Khan, while he posted himself in the center supported by another chosen body of cavalry under Nusrat Khan. Zafar Khan made a furious assault on the Mongols and routed them. The Sultan ordered Ulugh Khan to advance and pursue the enemy. But the perfidious man, jealous of the glory of Zafar Khan, stopped at a small distance, while Zafar Khan continued the pursuit alone for upwards of thirty miles. Meanwhile Targhi, a Mongol chief, who was lying in ambush on the way, saw that there were no troops behind Zafar Khan to support him. He marched after Zafar Khan and surrounded him with his forces. Zafar Khan drew up his troops, though not half the number of the enemy, divided into two squadrons, and again renewed the conflict. At last his horse's leg being cut off by a Sabre, he fell to the ground. He rose instantly and seized a bow and quiver on foot. By this time, most of his men were slain. Qutlugh Khwaja, admiring his bravery, called out to him to surrender, "Come with me, and I will take you to my father, who will treat you with higher honour than the Sultan of Delhi has done". Zafar Khan replied, "I know no greater honour than to die in fulfilling my duty". Qutlugh Khwaja, seeing that Zafar Khan could never be captured alive, ordered to shower arrows on him. Thus Zafar Khan received martyrdom. Towards the end of the night, the Mongols retired. Qutlugh Khwaja, who was seriously wounded in the battle, died soon. The bravery of Zafar Khan became famous among the Mongols; if their horses were unruly, they would say, "Perhaps it has seen the ghost of Zafar Khan!" Ferishta says that Ala-ud-din considered the death of Zafar Khan as a second victory.

Of the four Khans of Ala-ud-din Khilji, three of them had died by this time: Zafar Khan died in the battle with Qutlugh Khwaja. Nusrat Khan died in 1299, during the conquest of Ranthambore. Ulugh Khan died shortly after the Ranthambore expedition. Only Alp Khan was left.

Fourth Mongol invasion took place a month after Ala-ud-din's return from Chittor in 1303. Targhi approached Delhi and encamped on the banks of Yamuna. At that time, Ala-ud-din was not in a condition to face the enemy in the battle field; a large part of his troops had gone to the South to conquer Warangal. He had no time to refit and recruit his army; no muster of the army had been held. Ala-ud-din with his small army left the capital and encamped at Siri; he strengthened his defence lines by digging out trenches, building block houses and other measures; and waited for the arrival of the amirs, whom he had summoned from different directions. But the Mongols prevented the succours from joining the Sultan. On two or three occasions desultory conflicts and skirmishes occurred, but neither party gained any decided advantage. Fortunately, after an unsuccessful siege of two months, Targhi returned to his country. The people of Delhi ascribed this miracle to the favor of Nizamuddin Auliya, the Sufi saint.

After Targhi's return, Ala-ud-din concentrated on the defence of his country against the repeated inroads of the Mongols. He now took effective measures to prevent any future Mongol invasions.

In 1305, Ali Beg, Tartaq and Targhi marched towards Hindustan. Ali Beg and Tartaq occupied Amroha. Ala-ud-din dispatched Malik Naik Akhur Beg, a Hindu, who achieved a great victory over them. Targhi was shot by an arrow in the middle of the battle. Ali Beg and Tartaq were taken prisoners and sent to Delhi.

After this the country remained free from the Mongols till the end of the reign of Qutb-ud-din Mubarak Shah (reign: 1316-1320). Ghazi Malik, the governor of Dipalpur and Lahore (afterwards Sultan Ghiyas-ud-din Tughlaq), made continuous incursions into their country, plundering the provinces of Kabul, Ghazni, Kandahar and Garmsir.
Share
Post a Comment
Labels#Delhi Sultans
Newer
Older