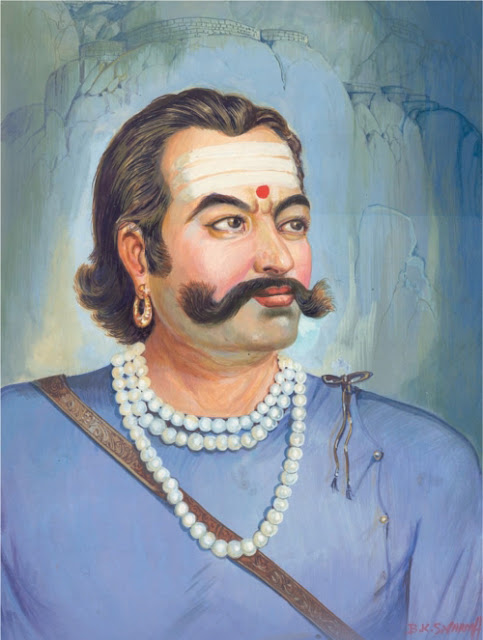 For several years Ramadeva had not sent his tribute to Delhi. So in 1308, Ala-ud-din Khilji sent an army under his favorite general Malik Kafur Hazar Dinari and Khwaja Haji with an army of 100,000 horse to invade Devagiri. On the way Ain-ul-Mulk Multani and Alp Khan also joined the army.

Hearing of the Devagiri expedition, Kamla Devi begged Ala-ud-din to order his generals to bring her daughter Dewal Devi to Delhi. In the meanwhile, Singhanadeva or Shankaradeva, the son of Ramadeva fell in love with Dewal Devi and requested Rai Karan to give her in marriage to him. But before the marriage took place, Alp Khan seized her and took her to Kamla Devi at Delhi.

When Malik Kafur entered Devagiri, says Ferishta, 'Ramadeva, being in no condition to oppose the Mohammedan troops, left his son in the fort, and advanced with presents to meet Kafur, in order to obtain peace'. Amir Khusru states that when Devagiri was plundered, his son [Ramadeva had two sons; Singhanadeva and Bhimadeva or Bhillama] fled away with few followers. Ramadeva and his followers were made prisoners; and Malik Kafur took the Rai's vast wealth and seventeen elephants. Malik Kafur returned triumphant to Delhi carrying with him Ramadeva and his followers. Ala-ud-din showed great favour to Ramadeva and gave him the title of Rai Rayan (King of kings). After a stay of six months Ramadeva was permitted to return to his own kingdom. Ala-ud-din gave him a lac of tankas, and sent him back in great honour to Devagiri. Ferishta states that Ramadeva had not only the government of his own dominions restored to him, but the district of Navsari and some others were also added.

In 1311, when Malik Kafur marched against Ma'bar (Madurai) and Dwarasamudra by the way of Devagiri, Rai Rayan Ramadeva rendered valuable assistance to the Sultan's army.

In 1312, Malik Kafur marched against Deccan to collect the tribute of the Raja of Warangal and bring Ramadeva's son who had withheld the allegiance and tribute, under due subjection. Malik Kafur inhumanly put to death the son of Ramadeva [most probably Singhana] and took up his residence at Devagiri. In the last year of Ala-ud-din's reign, Harpaldeva, the son-in-law of Ramadeva, initiated rebellion in the Deccan and declared his independence.
Share
Post a Comment
Labels#Delhi Sultans
Newer
Older