When Jalal-ud-din Khilji Became the Sultan of Delhi

Posted onJuly 25, 2018
Sultan-ul Halim Jalal-ud Dunya Wa-ud-din Firoz Shah Khilji (1290-1296) was the founder of the Khilji dynasty, the second Muslim dynasty that ruled Delhi. Barani writes, 'The people of Delhi had been for eighty years governed by sovereigns of Turk extraction, and were averse to the succession of the Khiljis'. Jalal-ud-din also had no confidence in the loyalty of the people of Delhi; for this reason he remained at Kilokhari (the palace which was built by Sultan Qaiqabad). Afterwards, he became distinguished for his humanity and kindness.

Jalal-ud-din was seventy years old when he ascended the throne. He established a new town (Shahr-i-nau) at Kilokhari, improved fortifications and laid out beautiful gardens. The people of Delhi perceiving the lenity and justice of the Sultan, gradually became supporters of the new government. Yaghrish Khan, the Sultan's brother, was made the Aariz-ul-Mumalik. The Sultan's eldest son Ikhtiyar-ud-din received the title of Khan-i-Khanan, second son Hisam-ud-din, the title of Arkali Khan, and the youngest that of Qadr Khan. Ala-ud-din and Ulugh Khan, sons of his brother and son-in-laws of the Sultan, were made Amir-i-Tuzuk and Akhur-beg respectively. Malik Fukhr-ud-din Kotwal was confirmed as Kotwal. With great pomp, Jalal-ud-din entered Delhi and took his seat upon the throne of his predecessors. He exclaimed, "For years I have bowed my head before this throne. Today I have been enabled to put my foot on it. How can I express my gratitude to God for this!" 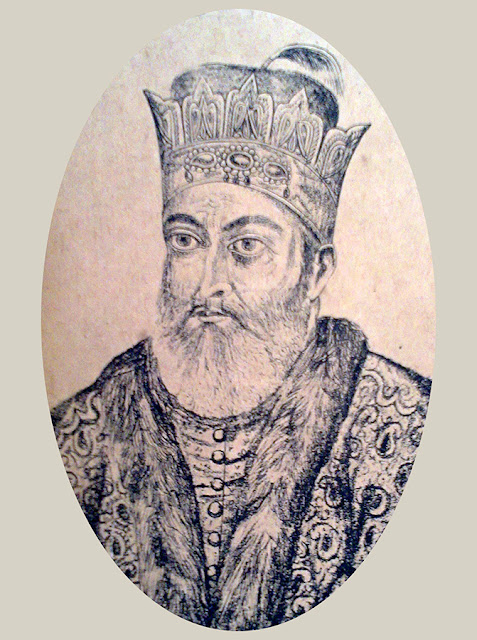 He then mounted his horse and went towards the ruby palace (royal residence), and dismounted at the gate, as usual. Malik Ahmad Habib Barbak (the son of the Sultan's sister) represented that now the ruby palace belongs to the Sultan, and there was no reason to dismount at the gate. Jalal-ud-din said, "Under every circumstance, respect is due to my former patron Balban, who had built it when he was a Khan; and it is therefore the private property of his descendants; and I have no right to occupy it". He added that he could not transgress the rules of Islam for the sake of temporary expediency. Jalal-ud-din then entered the ruby palace, and sat in the line which had been assigned to the amirs. He said to the amirs and maliks, "May worse evil befall the houses of Aitamur Kachhan and Aitamur Surkha! for if they had not acted deceitfully and treacherously towards me, I would not have fallen into this danger; and should have passed my life as a Khan or malik. Now I can not even imagine what the end will be! Seeing that in spite of the power and grandeur of Sultan Balban, the length of his rule, and the greatness of his ministers and councilors, the empire did not remain with his descendants, will it remain with me? and after me, what will happen to my descendants?" Some of the amirs sympathized with him; but others whispered to each other, "This is a strange sort of a king, who has hardly placed his foot on the throne, but began to think about losing it again. The vigor and sternness which should always characterize a ruler of men can not be expected of him". After some time the Sultan returned to Shahr-i-nau and made it his capital.

Clemency of the Sultan:

Malik Jhaju's Rebellion: In the second year of Jalal-ud-din's reign, Malik Jhaju (the governor of Kara and the nephew of Balban) raised a rebellion with the support of many other Balbani nobles, who considered him as the rightful heir to the throne. With this large army, Jhaju marched towards Delhi. On hearing the news of this rebellion, Jalal-ud-din Firoz marched to Badaun and sent his son Arkali Khan towards Jhaju. A fierce battle was fought, in which Malik Jhaju was defeated, who took to flight. Arkali Khan pursued him, took him prisoner along with his followers and sent him to the Sultan. The rebels were conducted to the presence of the Sultan in fetters and chains. When they were brought before the Sultan, he instantly ordered them to be unbound. They were conducted to a tent, where they were bathed, perfumed and dressed in rich garments by the Sultan's attendants. The Sultan then arranged a feast for them and invited them to drink wine with him. They hung their heads down for shame and remained silent. The Sultan consoled them and said, "You drew your swords in the cause of your benefactor, and did what the salt you had eaten and the fealty you had sworn demanded. This cannot be deemed to be blameworthy on your part". Thereafter he sent Jhaju to Multan and ordered that he should be confined in a house, but should be treated with all honour.


Ahmad Habib and the Khalji chiefs were displeased at this lenity of the Sultan shown towards the rebels. They advised him to follow the policy of Balban, who never pardoned a traitor. If punishments were not done to rebels, that treason would soon raise its head in every quarter of the empire. If the Sultan and his followers fell into their hands, no name or trace of the Khiljis would be left in Hindustan. The Sultan sad that that what they said was certainly according to the rules of policy. He continued, "But, my friends, for seventy years I have lived like a Musalman; and have never shed the blood of a Musalman. I am now an old man and I wish to go down to the grave without shedding blood. And if we had fallen into their hands, and they had shed our blood, the burden of answering for it, tomorrow, on the day of judgment, would have been on their shoulders and not on ours. I have been for years one of Sultan Balban's servants, and the debt of gratitude for his favours is heavy on my shoulders. I have taken possession of his kingdom. It would be the height of baseness and injustice if I slew his adherents. Regarding these prisoners, I have come to the conclusion that if I spare their lives, they will be ashamed before God and man for the course they have pursued. I am sure they will never again form designs against me. If I go to Multan, like Sher Khan, I will fight against and give a good account of the Mongols, because they have invaded Musalman territory; but if I cannot reign without shedding the blood of Musalmans, I renounce the throne, for I could not endure the wrath of God". After returning from Badaun, Jalal-ud-din conferred the government of Kara on Ala-ud-din. The nobles spoke of the Sultan with disparagement, saying that he did not know how to rule a country and had no awe and majesty of kings.

When thieves and robbers were brought before the Sultan, he bound them by oaths never steal again, and released them. He often said that although in a war he could shed much blood, yet he could not slay a bound man. On one occasion, one thousand highway robbers were brought before him. He put all of them in boats and sent them away to Lakhnauti, where they were set to free.

The nobles were so discontented at the clemency of the Sultan that they even began to consult about deposing him at drinking parties. When these were reported to the Sultan, he said, "Men who were drunk, should not be held responsible for words which they utter in the state of intoxication". But when he heard that in a drinking party, Malik Taj-ud-din Kuchi, a man of some influence, had conspired against him, he ordered the conspirators to be brought before him. He scolded them and threw his sword on the ground, and exclaimed, "Ah drunken Negroes, who brag together and talk, one of killing me with an arrow, and another of slaying me with a sword! If any of you is man enough, he should take up this sword, and should stand up in front of me; so that he may know what real courage is". Malik Nusrat, a witty noble said to the Sultan, "Your Majesty knows that words uttered by drunken men have no meaning. We can never kill a Sultan who cherishes us like sons, as you do, nor shall we ever find so kind and gracious a sovereign; neither will you kill us for our absurd drunken ravings, because you will never find loyal and faithful maliks like us". These words pleased Jalal-ud-din, who called for wine and gave Nusrat a cup with his own hand. He then advised the rest to behave better for the future, and dismissed all of them with pardon.

Mongol Invasion: In 1292, Abdulla, the grandson of Hulagu, invaded Hindustan. The Sultan assembled his forces and marched from Delhi. The Mongols were defeated; many of them put to sword, many other were taken captive. The Sultan offered them peace, upon condition of their evacuating his dominions. Gifts and presents were exchanged. The Sultan called Abdulla son, and he addressed the Sultan as father. After this Abdulla departed, but Alghu, a descendant of Genghis Khan, with his followers, settled in India and embraced Islam. Ghiaspur was assigned to them for their residence. Jalal-ud-din gave one of his daughters in marriage to Alghu. However, they departed from India as the climate did not suit them. Some of them still remained here and formed alliances with Musalmans, who were called the New Musalmans.

Conquests: In 1290, he marched an army towards Ranthambore. He took Jhain, destroyed the idol-temples, and carried away much booty. At that time the ruler of Ranthambore was Rana Hammiradeva. Jalal-ud-din besieged the fortress of Ranthambore for a few days, but finding himself unequal to reduce the fort, he gave up the campaign and returned to Delhi. Towards the end of the year, Jalal-ud-din marched to Mandu and sacked it. Afterwards he marched a second time to Jhain and returned to Delhi after plundering it.

Jalal-ud-din always treated his subjects with the great kindness and tenderness, which was the reason of his downfall in 1296. He would never have been expected his end by the hands of his nephew Ala-ud-din, whom he had brought up.
Share
Post a Comment
Labels#Delhi Sultans
Newer
Older