Facts on the Tiger Throne of Tipu Sultan

Sultan Fateh Ali Tipu, popularly known as Tipu Sultan and also Tippoo Sahib (reign 1782-1799), British East India Company's most powerful enemy, had great fondness for architecture. Of which the most distinguished was his Tiger Throne. Tipu called his dominions Sultanate-i-Khudadad. He adopted Tiger as the emblem of his kingdom.

In 1783-84, Tipu dispatched an envoy to the Caliph in Rum, Turkey, to apply for letters patent to allow him to declare himself Padshah in imitation of the Mughals. The embassy returned in 1787, 'having fully obtained the objects of their mission, with a sword and shield, ornamented with jewels, and friendly and congratulatory letters from the viziers or ministers of the foot of the Musalman Throne' [the Sultan of Rum is considered the head of the Muhammadan powers or states]. Kirmani records: "The Sultan now, according to the suggestions of the viziers of Rum, and the advice of his faithful amirs, collected all the treasures of the state, or rather assumed the pomp and splendour of royalty, and directed the formation of a throne of gold, ornamented with jewels of great value in the shape of a tiger, a figure from the first most approved by the Sultan". In 1793, he noted: "The throne of the kingdom was also at a fortunate period finished as was desired", but as according to the customs of the Mughals, first introduced by Akbar; for they previously demanded the daughters of Rajput family, previous to the Sultan's ascension, a certain ceremony remained unperformed, the Sultan having dispatched hundreds of thousands of pounds to the Raja of Kutch; by his presents and favours made him obedient and willing to send his daughter to him in marriage. However, this happy result was not attained...".


Description of the Throne: 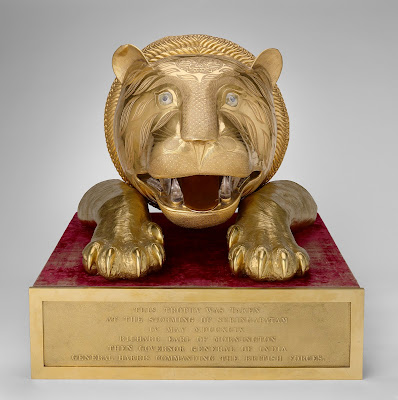 The throne of Tipu Sultan was like a howdah upon a tiger. The whole structure was made of wood. [It was valued at 60,000 pagodas, according to one record.] This throne was of an octangular form, and entirely covered with plates of purest gold, richly illuminated with tiger stripes and Arabic verses from the Koran. The octangular pavilion, about eight feet in length and by five in width, rested on the back of a royal tiger, which was in the standing position; this figure also was covered with plates of pure gold; and the eyes and teeth were of rock crystal. The tiger's mouth is open as if roaring.

This octagonal pavilion was raised 1.2 metres (4 feet) from the ground on eight supports which are in the form of tiger legs. It was surrounded by a railing with a small jeweled tiger head above each support. The ascent to the throne was by small silver steps, fastened with silver nails, on each side. [According to one record, the whole height to the top of the canopy was about eight to nine feet.]

The umbrella-like canopy over the throne was made of a lighter wood, covered with a thin sheet of gold and decorated with a fringe of fine pearls strung on threads of gold. The canopy was supported by a gilded iron pillar [seven feet high] that rose from the center of the back part, opposite the large tiger head.

On the top of the canopy, the figure of a beautiful Huma or the bird of paradise was placed. It was formed of gold and was entirely covered with precious stones like emerald, diamonds and rubies. Its beak was a large emerald with another suspended to it, the eyes two brilliant carbuncles, the breast covered with diamonds and the wings, which are expanded in a hovering position, completely lined with diamonds. On the back were many large jewels variously and fancifully disposed. Its spreaded tail, which resembled that of a peacock, was also ornamented with pearl and precious stones.

"Among the captured property in our hands was the superb throne overlaid with sheets of pure gold, which the Sultan had yet never mounted; and which was now destined to seal the triumph of his hated adversaries", notes Major David Price, the Prize Agent. Tipu had had made a vow not to sit on it, until he had recovered the provinces ceded to the British by the treaty of Srirangapatna.

This masterpiece was dismantled by the British followed by the fall of Srirangapatna; as the records states, 'this superb throne being too unwieldy to be conveyed from the spot without damage, and too valuable for any probable purchase entire, was broken up in the palace.'

The life-size golden tiger-head and paws from the base of the throne and the jeweled Huma bird now lie in Windsor Castle. 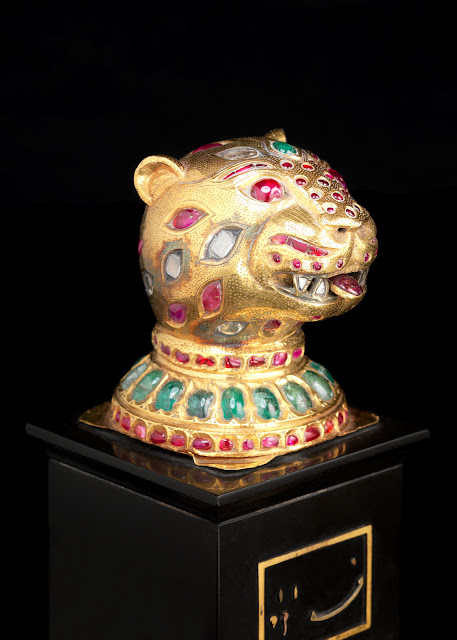 Huma or the Bird of Paradise: 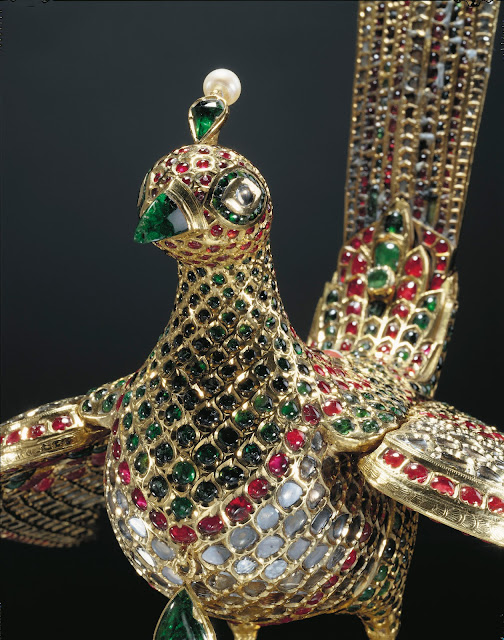 Huma is the bird of happy omen in Asia. The following interesting note on the Huma, or Indian Eagle, was written by the Marquess Wellesley in 1840 [from Memoirs And Correspondence Of The Most Noble Richard Marquess Wellesley]:

The Bird of Prosperous Empire - The ancient Persians as well as the Romans, presaged by the flight of birds. Of these some were of good omen, while others foreboded evil. Among the former, the most auspicious was the Huma. It belonged to kings; and its appearance and flights, under various circumstances, were the augury for the settlement of the crown, or the affairs of royalty. It is a carnivorous bird and its high soaring habit is the origin of the belief that it never rests upon the ground.

Anna Tonelli accompanied Lady Clive on her Indian journey from 1798 to 1801 as governess to her two daughters. By that time Tipu's throne had already been broken up. Anna Tonelli painted this using information provided by Tipu's Munshi (Treasurer) and from the sketch made by Capt. Marriot.


Major Price's Description of the Throne: The throne itself was a clumsy wooden platform, of 6 or 8 sides, entirely overlaid with gold, of the thickness, I should conceive, of a sheet of lead; sculptured all over with the tiger-streak device. It was to be supported on 4 tigers of wood, also covered with gold; and on an iron stay, curving over from the hinder part of the platform, was to be fixed, the Huma; also covered with gold, and set with jewels.

The History of the Reign of Tip Sultan, Being a Continuation of the Neshani Hyduri By Mir Hussain Ali Khan Kirmani trans by William Miles

The Asiatic Annual Register Or a View of the History of Hindustan and of the Politics, Commerce and Literature of Asia - 1800