Facts on the Tiger Motifs of Tipu Sultan

Tipu and his Tigers:

Tipu Sultan called his dominions the Sultanate-i-Khudadad, ie, the God-given government. He used royal tiger as his state emblem. In fact, Tipu saw himself as a mighty royal tiger, who was appointed by God to destroy God's enemies, ie, the British. Even live domesticated tigers were kept in the palace yard for the Sultan's amusement. Almost every item in his palace featured a tiger-related design; Thus 'tiger' became synonymous with Tipu's name. His throne, textiles, armor and weapons, as well as coins, flags and the uniform of his soldiers, were all decorated with bubri or tiger-stripe motifs. The walls of his capital were decorated with life-size caricatures of the British, a number of which featured British figures being attacked by tigers.


Tigers crawled over sword hilts and crouched at the muzzles of his cannons, while his weapons and ordnance bore a calligraphic representation of a tiger's face, reading Asadullah Al-Ghalib  meaning The Lion of God is the Conqueror. "The title 'Lion of God' (Asadullah), was given by Muhammad to his son-in-law Ali [Ali ibn Abi Talib], to denote the prowess and valour by which he signalized himself in fighting under the Prophet's banners. Tipu seems to have adopted Ali as the guardian genius, or tutelary saint, of his dominions. His selection of the tiger as an emblem, appears to be intended in honour of Ali, for the natives of Hindustan make no distinction between a lion and a tiger. Hence the word Asad, is by the natives of Hindustan termed tiger. Moreover Hyder, his father's name, which also signifies a lion, but interpreted by the natives of Hindustan, tiger, is another title of Ali. The name Hyder, thus distinguished by the triple circumstance of its being the title of Ali, the name of his emblem, and the name of his father, was introduced by him on every occasion; and either the word at length, or its initial letter, was stamped upon every article of every kind belonging to him", writes Major Alexander Beatson. 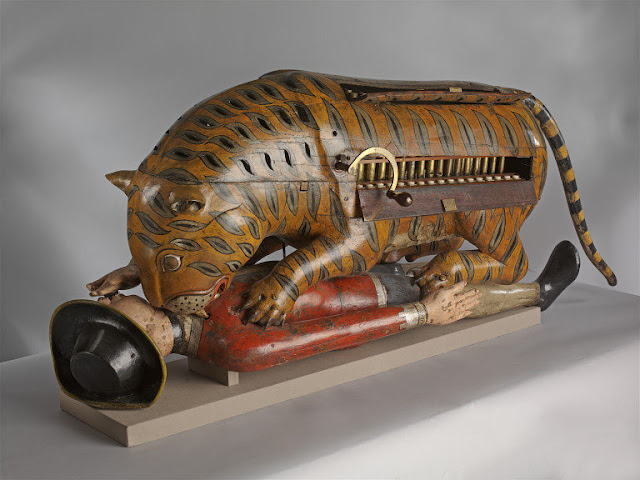 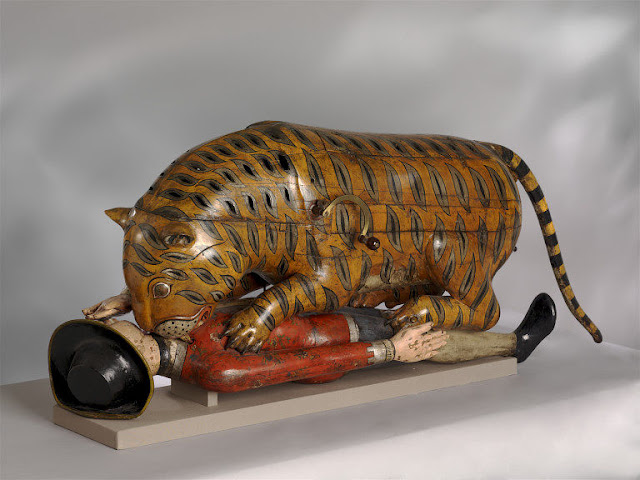 After the fall of Tipu Sultan in 1799, the British seized and looted his royal treasury, which also included his celebrated tiger throne and the mechanical tiger toy 'Tipu's Tiger'. This toy tiger was discovered by the British in the Rag Mahal (music room) of his palace at Srirangapatna.

The celebrated toy is a painted wooden automaton of a life-sized tiger attacking a British soldier [or officer]. The man is lying on his back while the tiger sinking its teeth into his neck. There is a pipe organ and a keyboard of 18 notes of ivory within the body of the tiger. The organ can be played by turning the crank handle at the side of the tiger; and when the handle is turned, the man's left hand moves up and down. The organ also produces a sound resembling the cries of dying man, intermixed with the roar of a tiger. The organ pipes and ivory keyboard can be revealed by opening a flap near the handle.


Following is the account of the tiger toy given in the Illustrated London News published in January 1858: "The cunning piece of workmanship, the toy, if it may be so called, of this warrior is a very rude imitation of a tiger carved in wood, partly hollowed. The outside of the tiger is painted in imitation of the stripes on the skin; and in the clutches of the savage beast is the effigy of a human being, intended to represent an Englishman, with a broad-brimmed chimneypot hat on his head, and other clothing suitable. On one side of the tiger is a handle, like those on organs, which communicates with certain pipes in the hollowed interior. On turning the handle the most horrible sounds are heard-a sort of roaring which may be supposed to issue from the throat of the savage beast; then come the shrieks and groans of the unfortunate Englishman. During the sounding of this music the head and some other parts of the sufferer are moved by springs, in something the same manner as the automaton figures exhibited in the London streets. In course of time the Englishman seems to breathe his last, when the tiger, with loud rejoicing, growls and worries up his prey. It is supposed that Tippoo Saib, when he failed to catch hold of one of our countrymen alive, subjecting him to an infliction something similar to that above described, was wont, during his leisure hours, to amuse himself with this effigy, which, no doubt, kept other similar pleasant sights in memory".

Tipu's Tiger was "another proof of the deep hate, and extreme loathing of Tippoo Saib towards the English; this was a most curious piece of mechanism as large as life, representing a Royal Tiger in the act of devouring a prostrate European officer. Within the body of the animal was a row of keys of natural notes, acted upon by the rotation of certain barrels in the manner of a hand-organ, and which produced sounds intended to resemble the cries of a person in distress, intermixed with the horrid roar of the Tiger. The machinery was so contrived that while this infernal music continued to play, the hand of the European victim was often lifted up, and the head convulsively thrown back, to express the agony of his helpless and deplorable situation.


The Tiger toy was made around 1793-94, and perhaps the internal mechanism could be the work of a Frenchman in Tipu's service. Tipu may have commissioned this work inspired by the death of Hugh Munro, the son of his enemy General Sir Hector Munro, who had defeated him and his father Hyder Ali in the battle of Porto Novo during the 2nd Anglo-Mysore war in 1781. Munro's son was attacked and killed by a tiger after a hunting spree near Bengal in 1792. It is said that Tipu's custom in the afternoon was to amuse himself with this 'miserable emblematical triumph of the Khudadad over the English Sircar'.

Royal Bengal Tiger is the national animal of India.