Last Roar of the Mysore Tiger

David Baird discovered Tipu's body among the heaps of slain. Later that night his body was brought to the palace. Major David Price, the prize agent, reached the palace the next morning. He narrates, "In one of the common short doolies [palanquin], intended for women, with his knees bent upwards almost double, I beheld the lifeless remains of the late dreaded Sultan. The right shoulder was skillfully bandaged up. His complexion I considered fair, for his caste; and his hands and feet were particularly delicate. His beard was close shaved, with the exception of the upper lip, on which he wore mustachios." He also mentions that an officer cut off one of the Sultan's mustachios to show his friend.


Abdul Khaliq [second son of Tipu Sultan] wished his father's body to be interred in the mausoleum of Hyder Ali Khan [which was built by Tipu himself] at Lal Bagh:

The preparations for the funeral were superintended by the principal Kazi (Judge) of Srirangapatna. Tipu's body was laid in the state palanquin, wrapped up in muslins, and covered by a rich brocaded cloth.

Four European flank companies escorted the corpse to the tomb, and the minute guns were fired during the funeral ceremony as a mark of respect to the deceased Sultan.

The body left the fort at half past four o'clock in the afternoon of May 5th. The bier was borne by the servants of the palace, preceded by two companies of European grenadiers and immediately followed by Abdul Khaliq on horse back, accompanied by the Killedar Mir Nadim, and a great number of Musalmans on foot. Two companies followed in the rear. The Kazi chanted some verses from the Koran, which were repeated by the attendants.

The streets were lined with inhabitants; many of them prostrated themselves as the corpse passed, and expressed their grief by loud lamentations.

When the body reached the gate of Hyder's mausoleum, the grenadiers formed a street, and presented arms as the procession passed. The usual service being performed, the body was placed near to that of Hyder Ali Khan.

Last Roar of the Tiger:


On the evening of Tipu's funeral, a severe thunder storm occurred with rain and lightning; as if it was the last roar of the tiger Sultan. It continued for some hours. During this storm two British officers and some others were killed, and many severely hurt. The river Kaveri was overflowing vigorously. Below are some British accounts regarding the last roar of the Mysore tiger: 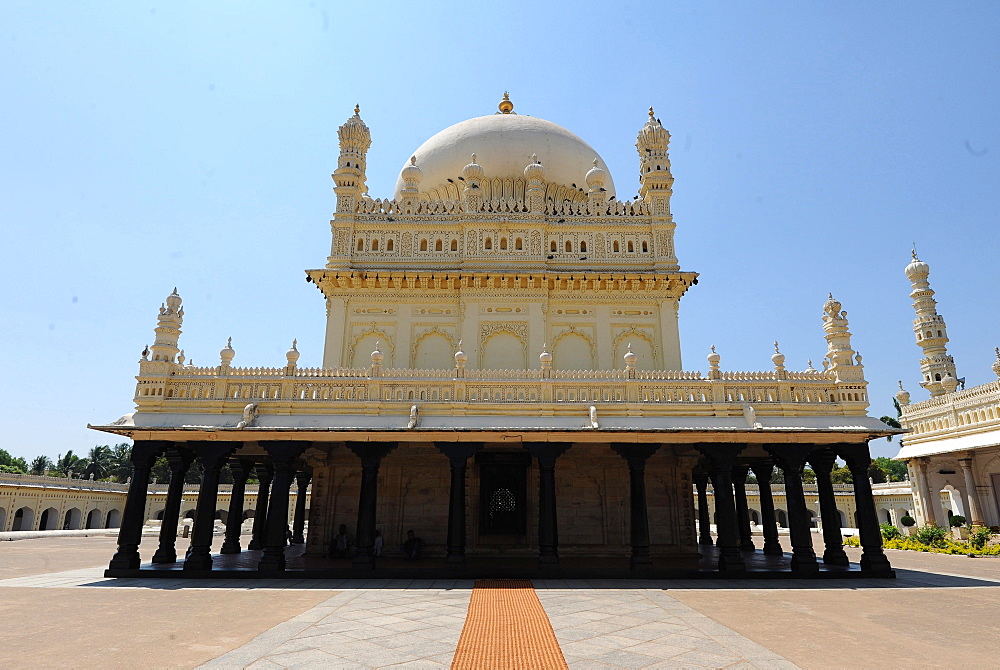 "I must relate the effects and appearance of a tremendous storm of wind, rain, thunder and lightning that ensued on the afternoon of the burial of Tippo Saib", notes Colonel Bayly of the 12th Regiment. "About five o'clock a darkness of unusual obscurity came on, and volumes of huge clouds were hanging within a few yards of the earth, in a motionless state. Suddenly, a rushing wind, with irresistible force, raised pyramids of sand to an amazing height, and swept most of the tents and marquees in frightful eddies far from their site. Ten Lascars, with my own exertions, clinging to the bamboos of the marquee scarcely preserved its fall. The thunder cracked in appalling peals close to our ears, and the vivid lightning tore up the ground in long ridges all around. Such a scene of desolation can hardly be imagined; Lascars struck dead, as also an officer and his wife in a marquee a few yards from mine. Bullocks, elephants and camels broke loose, and scampering in every direction over the plain; every hospital tent blown away, leaving the wounded exposed unsheltered to the elemental strife. In one of these alone eighteen men who had suffered amputation had all the bandages saturated, and were found dead on the spot the ensuing morning. The funeral party escorting Tippo's body to the mausoleum of his ancestors, situated in the Lal Bagh Garden, where the remains of his warlike father, Hyder Ali, had been deposited, were overtaken at the commencement of this furious whirlwind, and the soldiers ever after were impressed with a firm persuasion that his Satanic majesty attended in person at the funeral procession. The flashes of lightning were not as usual from far distant clouds, but proceeded from heavy vapours within a very few yards of the earth. No park of artillery could have vomited forth such incessant peals as the loud thunder that exploded close to our ears. Astonishment, dismay and prayers for its cessation was our solitary alternative. A fearful description of the Day of Judgment might have been depicted from the appalling storm of this awful night. I have experienced hurricanes, typhoons and gales of wind at sea, but never in the whole course of my existence had I seen anything comparable to this desolating visitation. Heaven and earth appeared absolutely to have come in collision, and no bounds set to the destruction. The roaring of the winds strove in competition with the stunning explosions of the thunder, as if the universe was once more returning to chaos. In one of these wild sweeps of the hurricane, the poles of my tent were riven to atoms, and the canvas wafted for ever from my sight. Towards morning the storm subsided; the clouds became more elevated, the thunder and lightning ceased, and nature once more resumed a serene aspect. But never shall I forget that dreadful night to the latest day of my existence....All language is inadequate to describe its horrors. Rather than be exposed to such another scene, I would prefer the front of a hundred battles."


Major David Price: For this very evening, at the moment the remains of the Sultan were borne to his last abode, there came on a thunder-storm, more tremendous than any one had ever witnessed: certainly under canvass. Fortunately I had regained my tent in camp, just as the storm was commencing. But the reverberation, occasioned by the rocky substratum of the district and the formation of the neighbouring hills, was quite terrific. During the continuance of this awful conflict of the elements, two officers were killed, in the Madras line; and on our (Bombay) side, Lieut. Bellasis, of the artillery, after escaping all the hazards of the battery, was dangerously hurt in his tent; and more than one of his servants killed close by his side.

Another account: Scarcely had his remains been committed to the earth, when a most tremendous storm of thunder, lightning and rain, commenced, such as had hardly ever been before witnessed or remembered, and continued its violence for some hours. So fatal was the effect of the lightning, that numbers of lives were lost in our camp and outposts: Lieutenants Barclay and Grant, of the seventy-seventh regiment, were unfortunately killed; and all the servants horses, and even dogs, of Lieutenant Bellasis, were struck dead, himself being much hurt. Forcibly as the value of our capture was felt on the day of its accomplishment, the British army had now reason to consider it with a still higher degree of self-congratulation, as the torrents which fell during the storm of this evening completely filled our batteries and trenches with water, and rendered the river impassable for some time afterwards.

Another account: A violent storm of thunder and lightning, which destroyed several Europeans and natives, gave an awful interest to the last solemn rites paid to a tyrant, whose life had been a continued career of ambition and cruelty.

Lieutenant-Colonel Alexander Beatson: To add to the solemnity of the scene, the evening closed with a most dreadful storm, attended with rain, thunder and lightning, by which two officers and some others in the Bombay camp were killed, and many severely hurt.

Major Allan: A violent storm immediately succeeded the ceremony: peals of the loudest thunder, which continued flashes of lightning and heaviest rain, made it quite awful and could not but stamp on the minds of all present, a lasting impression of the scene, which they had just witnessed. Two officers in camp were struck dead by the lightning and several persons were much hurt.
Share
Post a Comment
Labels#Mysore/Karnataka
Newer
Older