Was Syed Sahib a Traitor?

Syed Sahib was one of Tipu's principal men who is regarded by Mohibbul Hasan as having been in league with the British. Hasan writes that during the 4th Anglo-Mysore war, Purnaiya and Syed Sahib had been left by Tipu to prevent General Harris's advance towards Srirangapatna, but as they had entered into an understanding with the British, they remained inactive and allowed the enemy to march without any hindrance. But Kirmani does not accuse Syed Sahib of treachery. 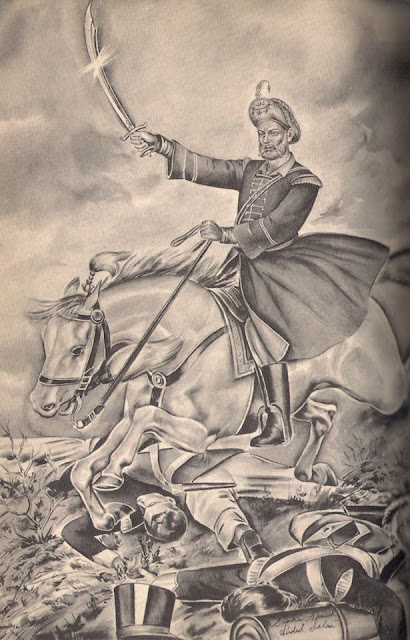 Syed Sahib was in charge of the south-west angle, near the breach, assisted by Sayyid Gaffur.


He was killed during the assault on 4th May, 1799. But, just before his death, he gave information to the British that Tipu was inside the palace. Perhaps he did so as he was worried about the protection of his family.

Following are the accounts of two British officers who had seen Syed Sahib before his death:

Major Allan: "As Beatson, Dallas and myself were going along the rampart, two remarkably fair men, who lay in the inner ditch attracted our notice. One, whom Dallas immediately recognized to be Syed Sahib, attempted to raise himself. We supported him and he clung round Dallas's knees and implored his compassion [imploring compassion for himself and for the honour of his family; according to Mark Wilks]. He was much surprised at being known and asked Dallas where he had seen him, who answered, at Mangalore in 1784, when the commissioners negotiated peace with Tipu. We gave him some water and tried to carry his palanquin to him which lay in the ditch. We sent for a surgeon to dress his mortal wounds, but a heavy fire of musketry commencing in the fort and a party of the enemy advancing toward that quarter, we are constrained to leave Syed Sahib to his fate. On being questioned, he told us that Tipu and all his family were in the fort".

Lieutenant-Colonel Alexander Beatson: "In the rear of the great round tower, about three hundred yards from the breach. Majors Dallas, Allan and myself, discovered three men apparently dead; two of them, from their dress and other circumstances, appeared to be persons of consequence. Upon a closer examination, one of them showing some remains of life, was removed by Major Dallas from under the two bodies which had fallen upon him. He was severely wounded.

On being raised up, he at first looked wild and alarmed, as if he had mistaken our intentions; but when Major Dallas took him by the hand, and looking in his face, pronounced his name "Syed Sahib", he started and said, "Yes, it is Syed Sahib". In an instant he became tranquil and composed. He then raised Major Dallas's hand several times to his forehead, and embraced his knees in a most affecting manner. At first he was unable to speak, but having drank a little water, and apparently recovered a greater degree of strength he asked Major Dallas's name, and how he came to know him. Being informed that he was the officer who commanded the escort with the commissioners at Mangalore in 1784, he recognized him.


Syed Sahib observing how much we were interested in his behalf, showed his sense of our attentions by silent expressions of gratitude that are indescribable. We called the assistance of a surgeon, who was passing, but unfortunately, he had neither instruments nor dressings. Syed Sahib shook his head, and observed, it was of no consequence, for he was badly wounded, and must die.

While we sent for his palanquin, which was close at hand, to convey him to camp, we asked him several questions, and particularly if the Sultan was in the fort. He replied that he was in the palace. Scarcely believing it possible, we again urged him upon this point; he assured us that the Sultan and and his family were still there, and that he had left them but a short time before.

At this moment, a firing of musketry recommenced on the south rampart, at a little distance from us; and being informed that the enemy led on by Frenchmen, had rallied, and were advancing in force, we ascended the rampart, leaving Syed Sahib in the charge of two Sepoys. We were much concerned to learn that soon after we quitted him, in attempting to get up, he staggered, and fell into the inner ditch. This accident probably occasioned his death."


From one of the bastions, the three officers - Dallas, Allan and Beatson - saw a number of persons assembled in a Durbar; and one person prostrated himself before he sat down. They imagined from the intelligence just received from Syed Sahib that Tipu had escaped from the assault and had taken shelter in the palace. They immediately proceeded to General Baird and gave him information of all this. But, Baird had already heard that Tipu was in the fort from some other sources.

The Finding of the Body of Tipu Sultan

Next morning Allan accompanied by Captain Macleod, Mir Nadim (the killedar) and Syed Sahib's brother, went to the spot where he had seen Syed Sahib the preceding day. But his body was missing. Then they proceeded to Syed's house. His house had been plundered; the women and children of his family were subjected to great atrocities. They learned that Syed's body had been found and removed to a nearby house. In that house, they saw Syed's corpse laid out and his 8 year old son and some other relations weeping over it. A grave was prepared and the corpse was deposited in Syed Sahib's house. He was about sixty years of age.