If you search for a portrait of Hyder Ali, the Nawab of Mysore, you will come across many images on Google. Following are some of them:

There are some caricatures too.


In the center, Hyder Ali holding a sword grasps one of the Directors, Josias Du Pre, by the nose. Other members of the Company's Council are joined to Dupre by strings leading from their noses; they are all pleading on their knees. A small man with the head of a dog, identified by Hawkins as "Frowd", stands in front. Behind the kneeling men, stand three others: Robert Andrews, wearing dark spectacles and holding out a lantern suggesting he does not see clearly; John Call, with a dog's head and a collar marked "I.C."; "St Lubin", a Frenchman, with a monkey's head, rests his hand in a familiar gesture on the shoulder of Call. Behind Hyder Ali, to the left, Muhammad Ali, looking angrily at Hyder Ali, makes to draw his sword but is restrained by two Englishmen; General Joseph Smith stands on the left glaring at the East India Company Councilors, his hands evidently tied behind his back and his guns lying idly on the ground behind him. In the background two scenes refer emblematically to earlier stages in the conflict: on the left, Muhammed Ali is forced naked into a river by French forces, represented by St Ignatius Loyola, founder of the Jesuit Society, and a French soldier disguised as a priest, while Hyder Ali seizes his clothing and sword; on the right, a soldier (General Smith?) puts wood on a fire which is being encouraged by the French soldier working bellows and Loyola standing behind him.

We have now seen a number of drawings / engravings representing Hyder Ali. However, most of the images had come from the artists' own imaginations.

Kirmani [W. Miles] gives a description of the appearance of Hyder Ali in his book Nishan-i-Haidari. He says, "The Nawaub was accustomed to shave his beard, moustaches, eyebrows, and eyelashes. He was very dark, and strong bodied, but of middle size".

The description given by Maistre de La Tour (M.M.D.L.T) is as follows: He is about five feet six inches high, and very lusty, though active, and capable of bearing fatigue as well on foot as on horseback. His complexion is brown. His features are coarse, his nose small and turned up, his lower lip rather thick; and he wears neither beard nor whiskers. His habits, like those of all the natives of India, are of white muslin, with a turban of the same. His robe is fashioned nearly the same as those of the European ladies, which are called a I'Angloise. The body and sleeves fit neatly, and are drawn close by strings; the rest of the robe being ample, and in folds; so that when the Indian great men walk, a page supports their train, from their first stepping off the carpet to their entering into their carriages.

I have found few photos matching with the above description: 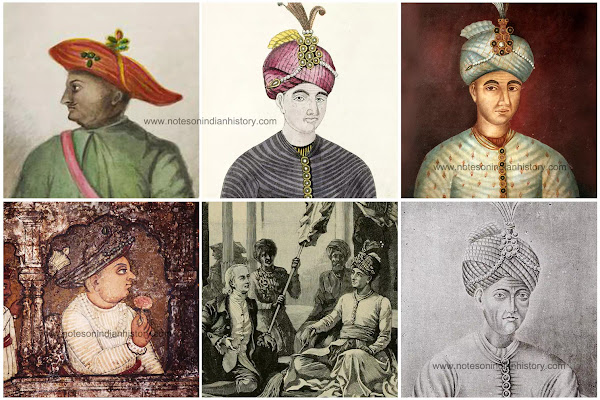 Top left image is from the Indian journal of Lady Charlotte Florentia Clive (1787-1866), illustrated with watercolours, some probably by her governess, Anna Tonelli. Top center image is taken from the book "The history of Hyder Shah, alias Hyder Ali Khan Bahadur, and of his son, Tippoo Sultaun' by M.M.D.L.T, General in the Army of the Mogul Empire, Revised and Corrected by His Highness Prince Gholam Mohammed [Son of Tipu Sultan]. Top right one is from Victoria Memorial Hall, Kolkata. Bottom left is a mural from Daria Daulat Bagh, Srirangapatna. In the bottom center image Hyder Ali is conversing with Schwartz, the missionary. It is an illustration for the book 'Conquests of the Cross, A Record of Missionary Work throughout the World'. Last image is 'Hyder Ali in old age' from ebay.