How to Destroy the British Power in India: Hyder Ali's Views

On the basis of a statement of Purnaiya, Colonel Marks Wills in his History of Mysore writes that in December 1781 Hyder Ali (r: 1761-1782) expressed regret for his war with the British. "It was about this period that Hyder being much indisposed, left entirely alone with his minister Purnaiya; he addressed to him in the following words", writes Wilks:


"I have committed a great error, I have purchased a draught of Seandee at the price of a lac of pagodas. I shall pay dearly for my arrogance. Between me and the English there were perhaps mutual grounds of dissatisfaction but no sufficient cause for war and I might have made them my friends in spite of Muhammad Ali Khan Wallajah, the most treacherous of men. The defeat of many Baillies and Braithwaites will not destroy them. I can ruin their resources by land, but I can not dry up the sea and I must be first weary of a war in which I can gain nothing by fighting. I ought to have reflected that no man of commonsense will trust a Maratha and that they themselves do not expect to be trusted. I have been amused by idle expectations of a French force from Europe, but supposing it to arrive and to be successful here, I must go alone against the Marathas and incur the reproach of the French for distrusting them; for I dare not admit them in force to Mysore".

D. S. Achuta Rau thinks that the above statement depicting Hyder Ali as a defeatist by Wilks must be considered a later invention and a hearsay recorded more than a quarter of a century later. According to Mohibbul Hasan these rumours were created to show that even a powerful ruler like Hyder was in the end obliged to recognise the invincible might of the British. According to N. K. Sinha, this is not the way in which a statesman would express his regret if he was convinced that he was pursuing a wrong policy.

If this was really the attitude of Hyder Ali he had the opportunity to terminate the war after December 1781. Truth is that even after December 1781, Hyder carried on wars against the British. In his last battle against Sir Eyre Coote at Arni, Hyder Ali was victorious and we know what all were his demands. Shortly after this Hyder died in December 1782.

Another story is that Hyder Ali in his last message to Tipu Sultan advised him to negotiate peace with the British. This story was found in a letter written to Thomas Graham, Persian Interpreter of Sir Eyre Coote on January 18, 1783 by Srinivasa Rao [Vakil of Sir Eyre Coote].


According to this story, when Tipu was performing the last rites to his father's body, he came across a scrap of paper tucked into one corner of his turban, on which were written the following: "I have gained nothing by the war with the English, but am now alas! no longer alive. If you, through fear of disturbances in your own kingdom, repair thither, without having previously concluded peace with the English, they will certainly follow you and carry the war into your country. On this account, therefore, it is better first to make peace on whatever terms you can procure, and then go to your own country. There was sometime ago a person by name Srinivasa Rao, who came to confer with me from the part of the General [Sir Eyre Coote]. Do you by means of him establish this channel of intercourse". 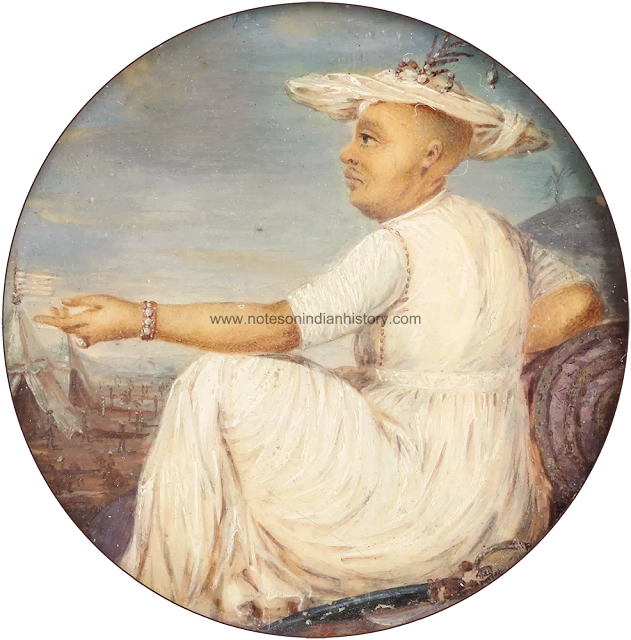 'Hydernama', written by Nallappa in Kannada language, is one of the most reliable sources for the history of Hyder Ali. According to Hydernama this is what Hyder did when he felt the sure approach of death:

In the afternoon of 7 December, 1782 Hyder called some of his important officers and requested them that after his death they should serve under his son [Tipu Sultan] as they did under him.

Following is the account of Kirmani regarding Hyder's last message to Tipu: Hyder Ali ordered his Munshi (secretary) to write to the Prince to the following purport, "that he was to make all necessary arrangements in that quarter, [Malabar] as quickly as possible, and then return; and that, if troops were necessary to his aid, he should send for them; for that, in matters of state, he had given him power to act at discretion or as he pleased; and that he was not to neglect or forget his duties to the government for a moment."


Moreover, the following account from Hydernama reveals the true view of Hyder Ali on the British:

One day Hyder assembled his important officers and consulted them about the best method of exterminating the British. Tipu Sultan said that it was Hyder himself who was responsible for making the British so powerful.

Hyder said that it was impossible to put down the British power in India by defeating them in one place, for they had various places to draw upon; like Madras, Bombay, Calcutta and above all England. According to him the only effective method for putting down the British in India was to bring about a war between the British and the French in Europe, then to set up people of Iran and Kandahar against Calcutta (in Bengal), then to set up the Marathas against Bombay. Thereafter with the help of the French Hyder himself to attack Madras. By thus instituting wars in all places simultaneously so as to make it impossible for the people of one place to help those of another, the enemy would be destroyed. Then only this country will come into his possession. Hyder then scolded Tipu for his foolishness.

The Death of Haider Ali By Irshad Husain Baqai