Was Purnaiya the Brahman, a Traitor?

Posted onMarch 30, 2019
We read in many history books that the fall of Tipu Sultan, the greatest enemy the British nation ever had in India, was a result of betrayal of some of his principal men: Mir Sadiq, the Prime Minister, Syed Sahib and Qamaruddin, two military commanders, Mir Nadim, commandant of the fort of Srirangapatna, and Mir Miran Purnaiya. According to Kirmani, Fateh Hyder, Tipu's eldest son, surrendered himself to the British 'at the suggestion of Purnaiya, the Brahmin (who in promoting the ruin and destruction of the Khudadad state had employed his utmost endeavours) and the advice also of other traitors of the Sultan's court'. 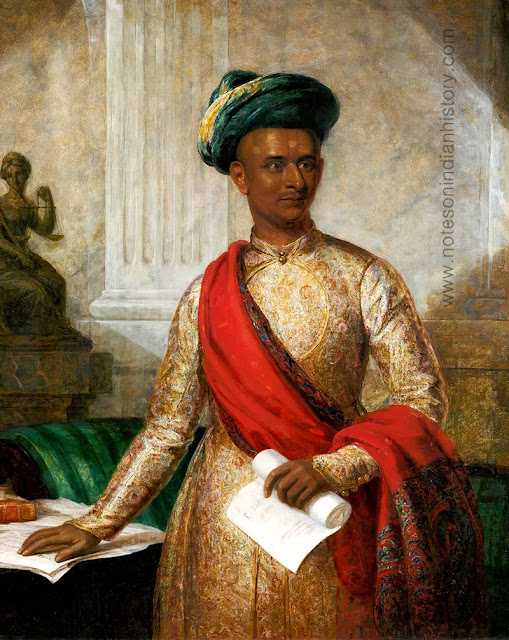 Purnaiya (1732-1812) was the 'Mysore tiger' Tipu Sultan's Finance Minister. He was a Madhva Brahman, who spoke Kannada, Marathi and Persian. He was next in rank to the Prime Minister Mir Sadiq.

Purnaiya served as the Finance Minister under Hyder Ali as well. It was Purnaiya's clever plan to keep the news of the Hyder Ali's death from the army, until the arrival of Tipu.


In the opinion of Mohibbul Hasan, author of 'History of Tipu Sultan', Purnaiya, Mir Sadiq and Badr-ul Zaman Khan were loyal to the Sultan till the peace treaty of Srirangapatna in 1792, but after that they were bought off by the British.

On the other hand, G. R. Josyer, author of 'History of Mysore and the Yadava Dynasty' remarks thus while telling about the faithfulness of Purnaiya:-

"During the campaign of Lord Cornwallis in the Third Mysore war, the British army made a night attack on the island of Srirangapatna. Purnaiya had been wounded by a musket ball, but managed, without the notice of the English troops, to take back from the north bank of the river a number of camels laden with coins meant for the pay of the troops. With the first alarm the bags of coins were ordered to be loaded, and Purnaiya with the camels crossed over into the island without losing a single rupee!", says Josyer.

"According to the reports of the Company's secret agents in Mysore, in 1797, the correspondence of Mir Sadiq, Purnaiya, Qamaruddin and that of some other officers with the British, the Nizam and the Marathas was intercepted. The Brahmans who were implicated in the plot were executed, while Mir Sadiq and Purnaiya were imprisoned. However, after they had retracted and pledged their loyalty to the Sultan, they were released and reinstated in their posts. Purnaiya and Syed Sahib had been left by Tipu to prevent Harris's advance during the 4th Anglo-Mysore war, but, as they had entered into an understanding with the British, they remained inactive and allowed the enemy to march without any hindrance", says Hasan.

Purnaiya surrendered himself to General Harris [Commander-in-chief of the army which stormed Srirangapatna] shortly after the fall of Srirangapatna. We have a letter written by General Harris on 13th May, 1799 to the Governor General Lord Mornington [Richard Marquess Wellesley, also known as Lord Wellesley], which might prove the innocence of Purnaiya.

Below are some excerpts from the above-mentioned letter of General Harris:-

"This morning Purnaiya, who has so long been at the head of the principal departments of the Mysore government, and enjoyed the confidence of the late Sultan, paid me a visit, having arrived last night from the army, which remained under his command.....After the customary ceremonies of an Eastern visit, Purnaiya stated, in reply to my questions concerning Fateh Hyder, and the reason of his absence, that prudence required the presence of a person of rank with the troops; but the Prince was ready to attend my summons. This led to farther conversation on the subject of the troops, still remaining in arms near Srirangapatna.

He suggested that Fateh Hyder should be placed at the head of the government, to be established in this country, and he should pay to the English such tribute as shall be agreed upon. British troops shall garrison such forts, as they deem necessary for the security of the country.

Purnaiya declared that under this arrangement, which he very strongly pressed on my consideration, he would be responsible for the immediate settlement of the country. He intimated that he expected as Diwan, to be charged with the administration of the revenues under the new government. He stated, that the troops who, under any other plan would, become a lawless banditti, pillaging the country, and only to be quelled by force, would under this remain quiet, on the hope of future employment in the service. The family of Tipu Sultan would be preserved in a respectable rank, and the power of the English established by an arrangement, the moderation of which, would do honour to the national character.

I insisted that Fateh Hyder should immediately repair to Srirangapatna; and waving the consideration of permanent settlement, requested him to suggest measures for the temporary arrangements of the remains of the Sultan's army, and the re-establishment of order in the country. This, he said, was difficult, unless a prospect of the adoption of such a plan, as he had suggested was held out...Mir Qamaruddin's party, he informed me, had joined that now with Fateh Hyder.

In the course of conversation, the possibility of an arrangement was hinted, for the establishment of the ancient Hindu government of Mysore, but Purnaiya cautiously evaded entering into this idea, in the slightest degree. The Mohammedan interest is so intimately blended with every department of the state in this country, that no plan by which it is set aside in favour of a Hindu Prince, could produce the very desirable effect of restoring tranquility, and reconciling the troops, and most powerful class of the inhabitants to the change of government".

We have also the account of Major Allan: "On 12th May, Purnaiya paid a visit to General Harris.....He urged the propriety and dignity of making a liberal provision for the sons of Tipu Sultan; one of whom, he trusted, would be placed on the throne; we at the same time keeping a body of troops in the country. Under such an arrangement, he said he might be employed but under any other, he hoped to be allowed to go to Rameswaram. Purnaiya appears to deserve the character he bears for shrewdness and ability", Says Major Allan.


Here's Colonel Arthur Wellesley's comments on the same, in a letter written on 23rd May, 1799 to Lord Mornington, his elder brother:-

"I think that the persons about the General now seem to be of opinion that it would be best to restore part of the country to one of the sons of Tipu, keeping garrisons in its forts and strongholds, or taking from him annually a certain sum as tribute. This is one of Purnaiya's proposals, upon which it must be observed that they were all framed with a view to his own interest, and the future management of the revenues of the country to be restored by himself. Although I don't think that there is any reason to believe, as he states, that the country cannot be settled unless part of it is restored in some manner to one of Tipu's sons, that, on the contrary, I am certain that it can be settled under any arrangement that you think proper, it is not quite clear that the most politic and most proper measure, and certainly the most generous one, would not be to place one of them in the government of part of it. This is a question of policy, which however has no relation whatever with the settlement of this country, and one upon which you might decide with as much propriety in Calcutta as you could in Srirangapatna".

Following are some excepts from Arthur Wellesley's letter to Henry Wellesley, his younger brother, written on 30th May, 1799:-

"If you write anything to camp respecting your proposed arrangements, it will be necessary to caution them particularly to say nothing upon the subject to Purnaiya until the whole is ready for execution. My reason for this caution is that it may be depended upon if one black man ever hears of your plan, it may as well be published in the bazaar, and then not only will every Musalman begin to quake for his own situation, and in consequence intrigue and plot, but it is to be expected that some if not all the Princes will endeavour (or rather will be urged) to make their escape. Hitherto they have been kept without restraint: they go where they please, and do what they please. To put them under restraint immediately would give a suspicion of what is intended which would have a bad effect among the Musalmans. The steps to be first taken in my opinion...is to announce to the family of the Sultan the proposed arrangement of the country and their future fate. At the time when the family are informed of the proposed arrangement it need no longer be a secret, but till then it ought to remain among ourselves. When they are informed of their fate they ought to be kept under a reasonable restraint, at least until they are removed to a distance from Srirangapatna".

In the end, Lord Wellesley, choose the five-year old Hindu prince Krishnaraja Wodeyar, over Fateh Hyder, and appointed Purnaiya as his regent.


"If Purnaiya had been a loyal servant of Tipu", says Hasan, "he would not have been entrusted with the most important post in the State [ie, Diwan of the Wodeyar Prince]". In short, Purnaiya benefited from Tipu's death, but as Kate Brittlebank says, 'Wellesley was not immediately enthusiastic about appointing Purnaiya regent'. The Mysore Gazetteer adds that 'It was resolved upon to appoint Purnaiya, to the post of Diwan in view of the knowledge he possessed of the finance and resources of the country, in preference to Tirumala Rao, the agent of Maharani Lakshmi Ammani'.

Josyer adds, "While thus his faithfulness and talents have to be commended, the fact that after the fall of Tipu he urged the restoration of Tipu's son on the throne in preference to the heir of the Hindu royal family does not redound to his credit. His patrons Hyder and Tipu having died, there was no conflict of loyalty, and as a Hindu statesman he should have easily recognised the claim of the Hindu Dynasty which had never been dethroned or destroyed. That he did not do so should only be explained by the fact of his not being a Mysorean, and the motive of self-interest, arising from the fear that his own power would end if the Maharaja were restored. That has left a taint on his otherwise admirable reputation".

Diwan Purnaiya passed away at Srirangapatna in March 27, 1812.


Rao Saheb Arni, a relative of Purnaiya's direct descendant Rajeev Purnaiya, remarks, "I refuse to believe that Purnaiya was a traitor. If he did, he wouldn’t have espoused the cause of Tipu’s eldest son, Fateh Hyder, as the next ruler of Mysore. It’s a different thing that the English preferred a scion of the Wodeyar clan as the next ruler. In fact, Tipu had entrusted his son to the care of Purnaiya, long before the Fourth Anglo-Mysore War had begun".

The despatches, minutes, and correspondence, of the Marquess Wellesley, K. G., during his administration in India. Ed. by Mr. Montgomery Martin.