End of the Sultanate Khudadad

Posted onMarch 25, 2019
Tipu Sultan called his dominions Sultanate-i-Khudadad. On the fall of Srirangapatna on 4th May, 1799, Tipu's family and all his treasures fell into the hands of the British, except Prince Fateh Hyder.

Fateh Hyder was the eldest son of Tipu Sultan. He was encamped near the Karighatta Hill when he received the intelligence of his father's death. He had only remained with him 50-60 native officers; and about 120 French force under Mons. Chapuy. 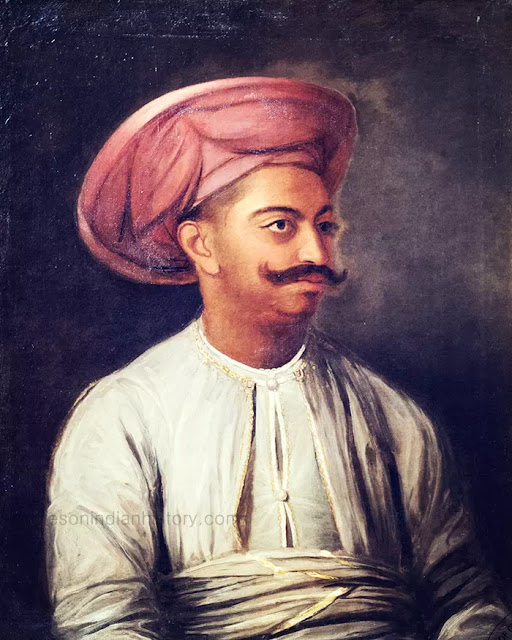 On 6th May, the Commissioners send letters to Fateh Hyder, Mir Qamar-ud-din [Senior Military Commander of Tipu] and Purnaiya [Chief Financial Minister of Tipu] inviting their immediate surrender. "I expect them shortly, as their families are in the fort", said General Harris in a letter to Lord Wellesley.

"Fateh Hyder Sultan", writes Kirmani, "when he saw the symptoms of fear, distress and despair prevailing among his followers, and at the same time heard the consolatory and conciliatory language used by the English General and other of his officers; included in which were hints or hopes held out of his being placed on the throne; abandoned all intention of fighting or further opposition, although several of his bravest officers such as Malik Jahan Khan (Dhondia Wagh), also Syed Nasir Ali Mir Miran and other Asofs dissuaded him from peace, and strenuously urged him to continue the war. They represented to him that the Sultan had devoted his life only to the will of God, but that his dominions, his strong cities and forts were still in the possession of his servants, and that his army with all its artillery and stores was present. That if there were any intention to reconquer the country, or if any spirit or courage remained, now was the time (for exertion), and that they were ready and willing to devote their lives to his service. This descendant of Hyder, however, notwithstanding his constitutional or hereditary bravery, at the suggestion of Purnaiya and the advice also of other traitors of the Sultan's court, (every one of whom thinking of his wife and family, abandoned his duty and loyalty) was deceived, and acted in conformity to their wishes, at once rejected the prayers of his well wishers, and consequently washing his hands of kingly power and dominion, he proceeded to meet and confer with General Harris".

Fateh Hyder surrendered himself to General Harris on 13th May.

"Fateh Hyder came to the north bank of the river from beyond the French Rocks, where he had been since the fall of Srirangapatna....Captain Malcolm went to meet Fateh Hyder; he found him under a common tent, with about 50-60 Sirdars, who attended him to head-quarters. Fateh Hyder was much depressed and affected, no doubt, by the change of his fortunes", writes Major Allan.

Thus, with the surrender of Fateh Hyder, ended the 38-year long Musalman rule at Mysore, a dynasty composed only of two rulers: Nawab Hyder Ali Khan and his son Tipu Sultan.

The British placed the five-year old Mummudi Krishnaraja Wodeyar, a descendant of the ancient Hindu family, on the throne of Mysore on 30th June, with Purnaiya as his Diwan.

Kirmani says that Malik Jahan Khan also known as Dhondia Wagh, was released by the British after the death of Tipu Sultan, who then presented himself to the service of Fateh Hyder.
Share
Post a Comment
Labels#Mysore/Karnataka
Newer
Older