Posted onFebruary 07, 2019
Tipu Sultan had twelve sons, at the time of his death in the 4th Anglo-Mysore war in 1799 [reference: Mir Hussain Ali Khan Kirmani]. On the capture of Srirangapatna, Tipu's sons, his zenana, his brother Karim Sahib, all were all taken prisoners. The British restored Mysore to the Wodeyars and the Vellore fort [East India Company's strongest fortress in the Carnatic] was selected as the place of residence of Tipu's family. A liberal salary was allowed to each of the princes. But after the Vellore Mutiny, they were exiled to Calcutta.

Here are the paintings of Tipu's 9 sons, may not be in the proper order. Painting are by Thomas Hickey and also an unknown artist.

Fateh Hyder was the eldest son of Tipu Sultan. He surrendered to the British on 13th May. 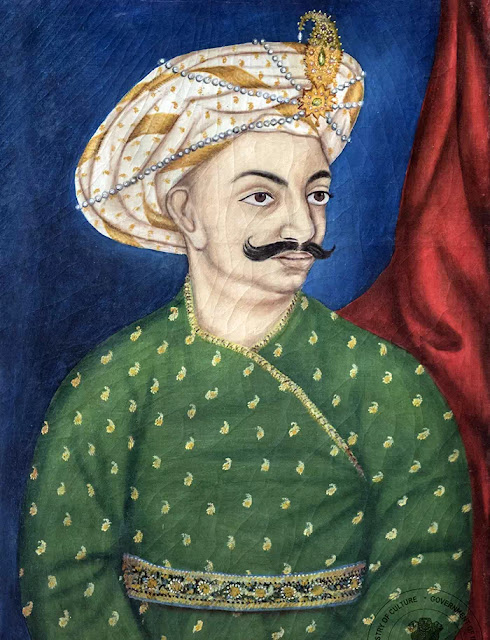 Lord Valentia says of him, "Futty Hyder, the eldest, but illegitimate son, has twelve or fourteen children. He, as well as his next three brothers, have Rs.50,000 each per annum; a much larger sum than he really received during his father's life-time, though he was nominally in possession of a larger jagir. Yet probably he has lost more than any by the deposing of his family; for although Tipu certainly did not intend him to succeed to the throne, yet, as he was the only one known to the troops and was by no means unpopular, it seems likely that he could have seized the succession. Futty Hyder conducts himself with the utmost propriety". Fateh Hyder is said to have closely resembled his father Tipu Sultan.

Fateh Hyder accompanied his father constantly during the 3rd Anglo-Mysore war. He had distinguished himself in the relief of Gurramkonda. He died in July 30, 1815, at Russapugly, near Calcutta. His death is thus recorded in the Calcutta Gazette of August 3, 1815. 'Futtih Hydur, the eldest son of the late Tippoo Sultan, died at Russapugla, last Sunday morning. The funeral was attended by Colonel Hawkins, who has charge of the Mysore Princes, John Eliot, Esquire, and a great number of Natives.

Abdul Khaliq was the second son of Tipu Sultan and the elder of the two hostages who were delivered to Lord Cornwallis followed by the treaty of Srirangapatna in 1792. Abdul Khaliq surrendered himself to the British on the following morning after the assault. He died in December 1, 1807.

When Abdul Khaliq learned that his father was no more: An interesting anecdote 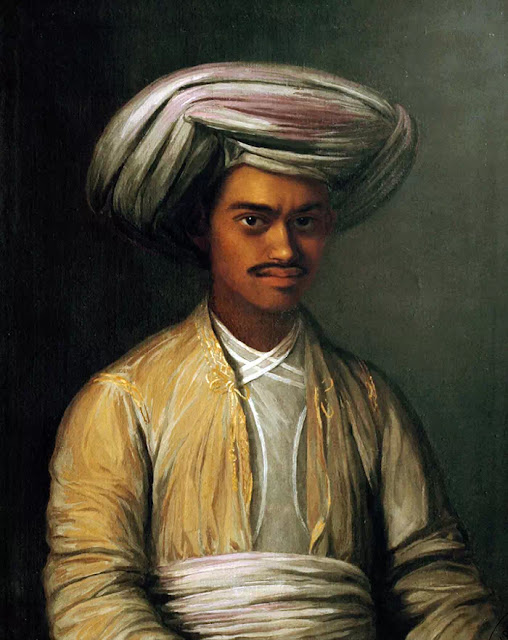 When Abdul Khaliq surrendered himself to the British, he was warmly received by General Baird. The General informed him that there was some reason to imagine the Sultan had fallen in the assault, and that the body of that person was in the palace. Abdul Khaliq proposed to send one of his attendants for ascertaining the fact. The attendant, who was sent, returned with a report of the Sultan's death, which the son received with perfect indifference. He unguardedly expressed a desire to see the deceased Sultan. "It will scarce be credited that when the curtain of the palanquin was drawn aside and he beheld his father's corpse that he showed no emotion either of pity or grief, but turning with seeming indifference from a sight, which affected even common beholders", writes Major Allan. He then requested Colonel Wellesley to inter his father's body in the tomb of Hyder Ali at Lal Bagh. 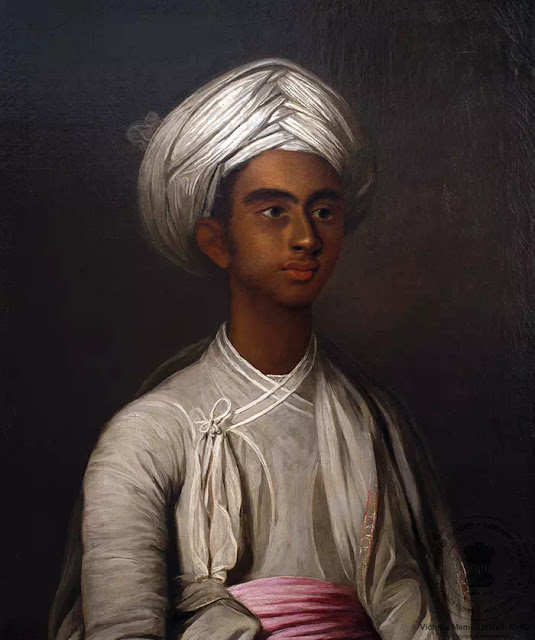 He was the younger of the two hostages sent to Lord Cornwallis in 1792. Muiz-ud-din surrendered himself to the British on the capture of Srirangapatna on 4th May, 1799. Lord Valentia describes him as the eldest legitimate son of Tipu. He says that Muiz-ud-din was the only one who gave a great deal of trouble to Major Marriott [officer-in-charge] by his misconduct; he spends all the money he can procure in buying dancing girls, runs in debt and even lately murdered a female servant who had been employed in the harem as a servant. Muiz-ud-din was suspected of his involvement in the Vellore Mutiny (10 July 1806). He died at Fort William in confinement on March 30, 1818, at the age of forty-four. 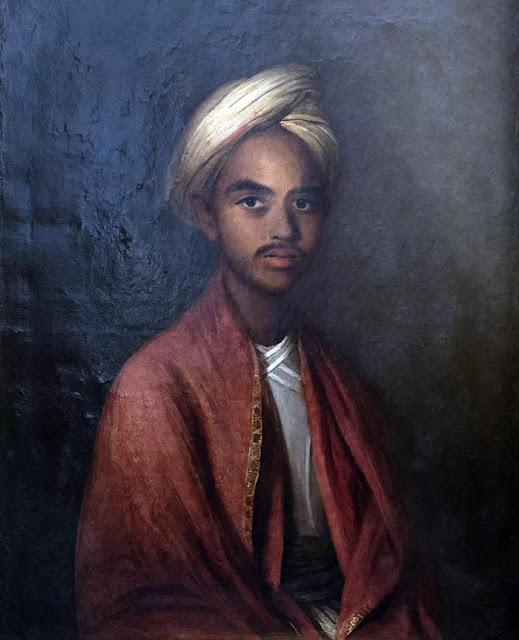 Muhi-ud-din was the legitimate son of Tipu Sultan. His name comes first in Kirmani's list of Princes. Muhi-ud-din died on September 30, 1811, at Calcutta. 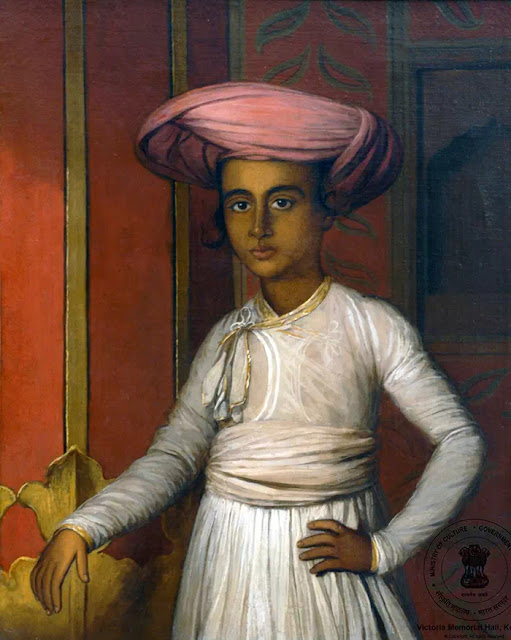 According to the inscription on the drawing of Shukr-ullah by Thomas Hickey, he was the 'favourite son' of Tipu Sultan. He died at Calcutta on September 25, 1837. 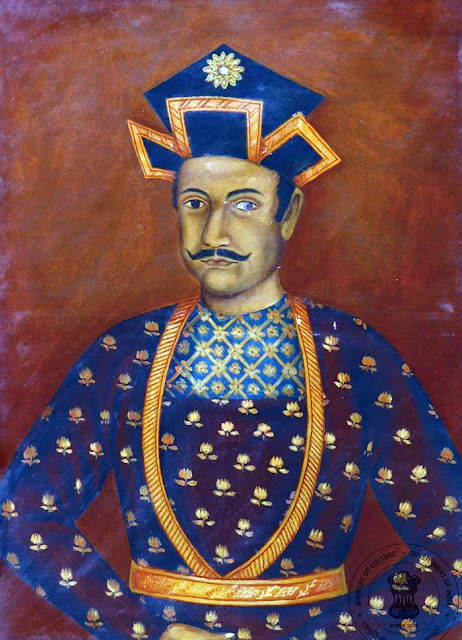 Prince Ghulam Muhammad built the famous Tipu Sultan Mosque in Dharmatala, Calcutta in 1842. He was for many years a Government pensioner and was created a Knight Commander of the Star of India. In 1854, he visited England. He died in August 1872, at Tollygunge, near Calcutta. 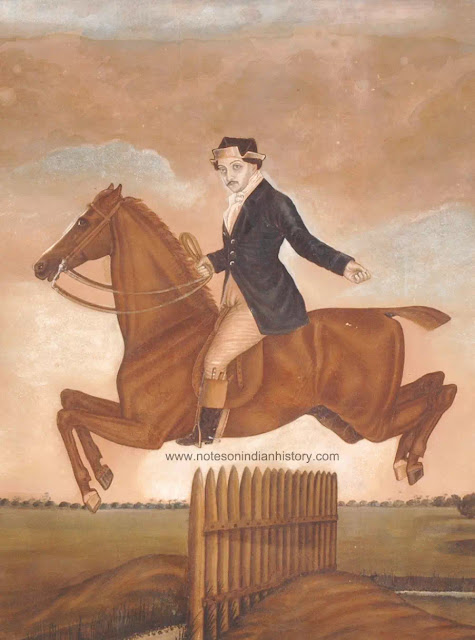 Check out more oil paintings of Tipu's sons on Pinterest.