Posted onMay 26, 2022
The Qutb Complex was declared a World Heritage site by UNESCO in 1993. The complex is under the protection of the Archaeological Survey of India. In the Complex you can find many monuments. The most beautiful of them is the Qutb Minar.
Who Built the So-called Qutb Minar?
The minaret of the Jami Masjid (Quwwat-ul-Islam) popularly known as the Qutb Minar is 5-storey stone tower. It was built by three sovereigns in different years during the Delhi Sultanate period: Qutub-ud-din Aibak, Shams-ud-din Iltutmish and Firoz Shah Tughlaq.
Inscription bands of the first storey contain the titles and names of Muiz-ud-din Muhammad Bin Sam otherwise known as Muhammad Ghori, Ghias-ud-din Muhammad Bin Sam (brother of Muhammad Ghori) and "Al amir-al-Isfahsalar ul-Ajall al Kabir" Qutub-ud-din Aibak.
The first storey or the basement was built by Qutub-ud-din while he was the viceroy of Delhi from 1193 to 1206, as a dedication to or by the order of his master Muhammad Ghori. 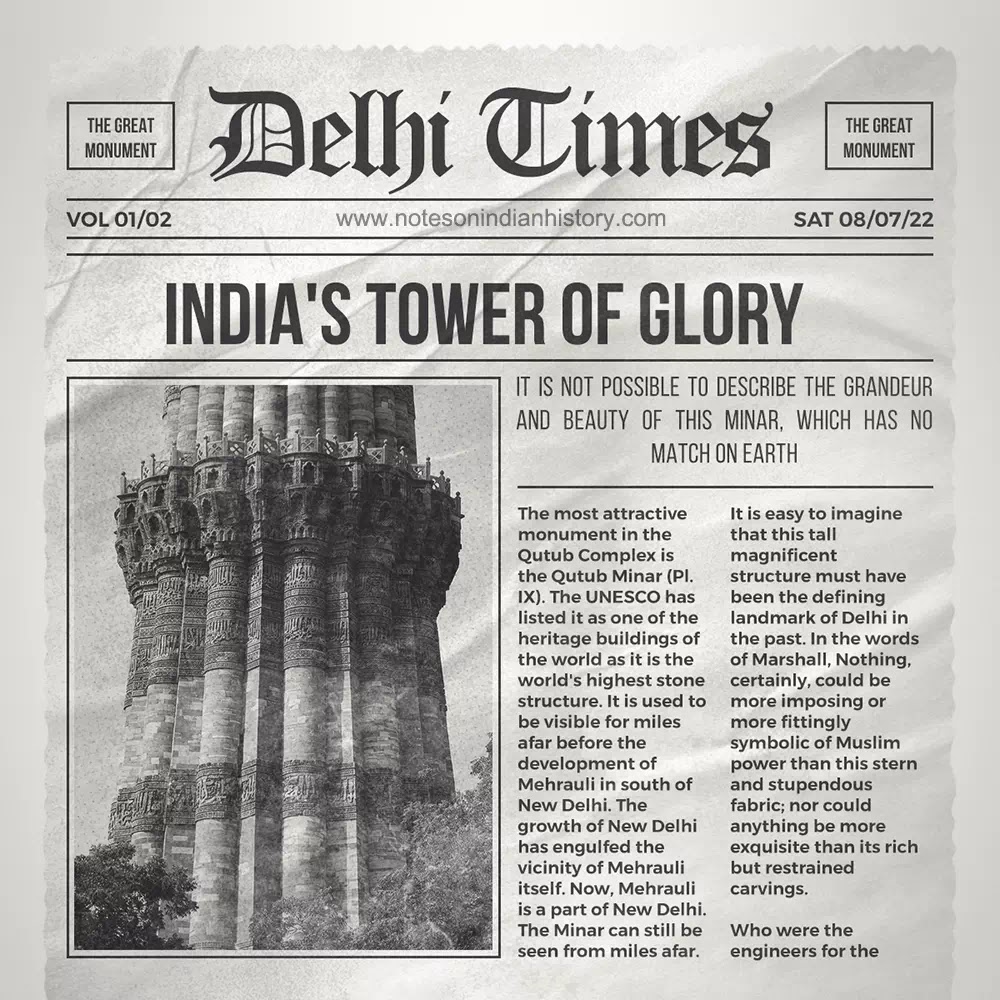 [Muhammad Ghori and his brother Ghias-ud-din held a joint rule at Ghor. In 1173, when Ghias-ud-din conquered Ghazni, he appointed Ghori his viceroy at Ghazni. Ghori officially succeeded his brother on his death in 1203.]
Fazl ibn Abul Maali was the supervisor of the 1st storey. He was also the Mutawali of the Quwwat-ul-Islam mosque in the reign of Aibak.
2nd, 3rd and 4th storeys were built by Shams-ud-din Iltutmish (r: 1211-1236). Upper portion of the 4th storey was struck by lightening in 1368. Firoz Shah Tughlaq (r: 1351-1388) rebuilt the 4th storey and also added the 5th storey using marble and red sandstone in irregular widths. The original marble cupola [which had seen by Ibn Battuta] was also destroyed in that lightning. Firoz Shah replaced it with a cupola made of red granite.
Sikandar Lodi also did some repairs in the 2nd and 5th storeys in 1503. There are also records of Hindu workmen regarding further repairs on the Minar post-1503, however most of them are incomplete.
Who Built the Qutb Minar - Ghori, Aibak or Iltutmish?
Qutb Minar is a Muslim Monument
Nagari Inscriptions on Qutb Minar
It's Qutb Minar of Delhi Sultans & Not Any Stambh

When Was It Built?
After Prithviraj Chauhan's defeat in the battle of Tarain, Muhammad Ghori captured Delhi and Ajmer, and established Muslim rule in India. He made his commander-in-chief Qutub-ud-din Aibak the viceroy of his Indian possessions with Delhi as capital and returned to Ghazni.
Three Nagari inscriptions on the basement mention the date AD 1199. This date points either to the foundation or to the completion of the basement in that year. In AD 1199, Qutub-ud-din Aibak was the viceroy of Delhi.
Who Named It Qutb?
In contemporary and near-contemporary Persian and Arabic records the Minar is known as Minar-i jami. i.e, the Minaret of the Jami Mosque (Quwwat-ul-Islam) of Delhi.
We first find mention of the name 'Cuttub Minar' in a drawing of 1794 by a British engineer Ensign James Blunt. The 1799 painting of the Minar, published in the 'Antiquities of India', was given the same name 'Cuttub Minar' by the British painter Thomas Daniel. So it was none other than the British who named it "Qutb Minar".
[According to British writers the name of Qutb Minar may have resulted from an inscription over the gate of the adjoining ruined mosque, stating that "Qutub-ud-din Aibak, on whom be the mercy of God, constructed this mosque". It is also possible that Qutb Minar got its name from Khwaja Qutbuddin Bakhtiar Kaki, who lies buried near by.]
Let us also use this popular name Qutb Minar.
Why the Qutb Minar Was Built?
Abul Fida, Amir Khusru, Muhammad Aufi and Shihab al-Din al-Umari calls the Minar the mazina of the Jami Masjid of Delhi.
In addition to the muezzin's tower, it was also a tower of glory. We can find it in a Nagari inscription: "Malikdin ki kirti stambha".
It was a tower of victory as well. We can find it in another Nagari inscription: "Sri Sultrāna Alavadin Vijayastambha".
These Nagari inscriptions were, of course, engraved by Hindu artisans. This inscription may have been intended to praise Ala-ud-din's victories over the Mongols.
Aibak probably constructed the basement as a tower of glory to display Ghori's legacy in the land of India. It was Iltutmish who extended the prayer hall and screen of the mosque to include Qutb Minar within the enclosure as its mazina. Contemporary Persian records as well as an inscription on the second storey proves that during the reign of Iltutmish the Minar served as the mazina.
It seems doubtful that the muezzin would have ascended the whole height of the Qutb Minar five times everyday for his calling. Moreover, the audibility of the person calling from the top of the minar would have been negligible considering the height of the pillar.

We have firm historical proof that the tower was used as mazina in the reign of Iltutmish. The basement window was used for that purpose. 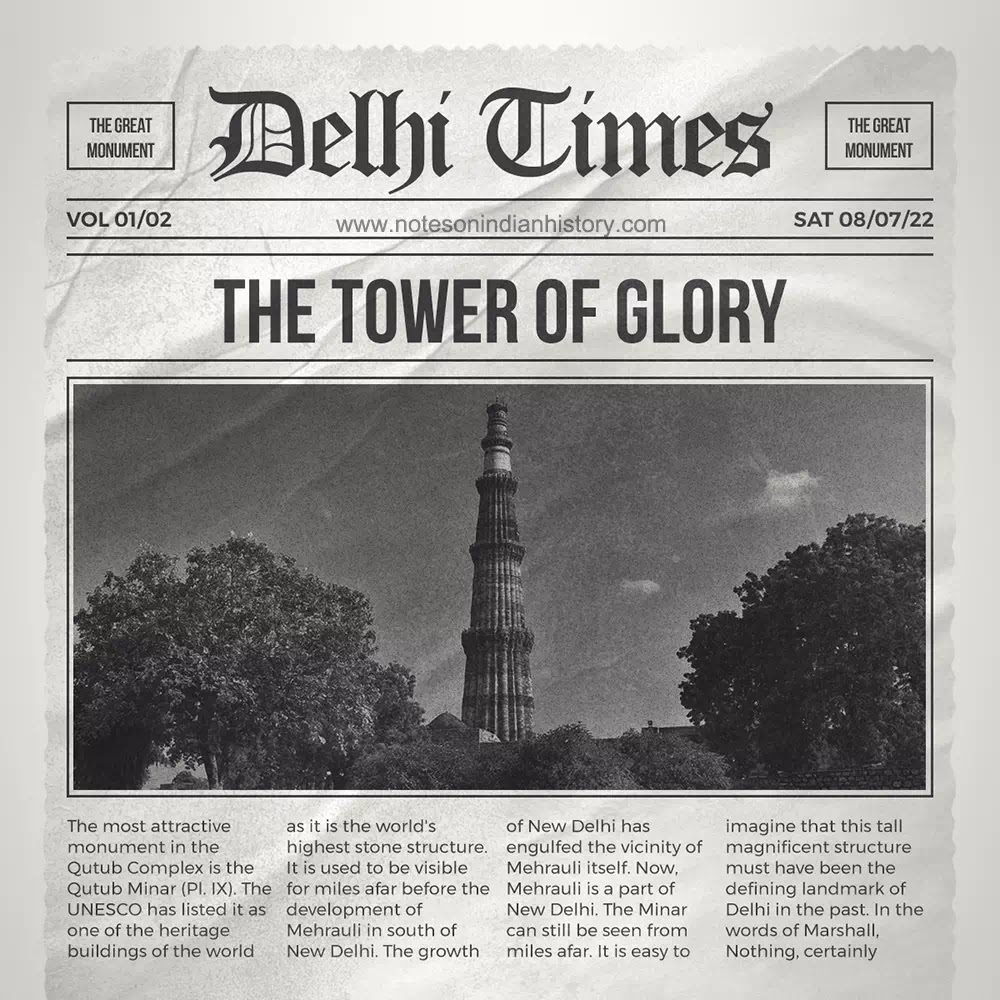 Why there are Nagari Inscriptions on the Minar?
We can find Nagari records of the various repairs conducted on the Minar. We thus learn that the craftsmen, masons, carpenters etc. all were Hindus. Even the names of Muslim Sultans were written in native form. Examples are Alavadin, Malikdin, Muhammadsahi, Pherojsahi. Some of the Hindu artisans were Chunilal, Visnu Kantha, Tulsi, Hira Devidas, Madholal, Badrgu, Sisa son of Hira, Mohana Lala, Nana, Salha, Lola, Lashmana, Harimani Gaveri son of Sahadhair, Chahada Devapala and Dharmu Vanani.
Hindu Origin:
Some self-proclaimed 'historians' allege that the Qutb Minar was originally an observatory, built by king Samudra Gupta, Chandragupta Vikramaditra, Visaladeva Vigraharāja or so-and-so. Some others say that Prithiviraj Chauhan constructed the tower so that his daughter or wife could stand on top and behold the Yamuna during her morning prayers.
The charges against Aibak are many: He pulled down the upper three storeys of this 'observatory' and reshaped it into the present Muslim edifice. And he did not mention this fact in any of the inscriptions out of fear. His atrocities didn't stop there, he named this tower "Qutb" after his own name!
In fact, Aibak mentioned the fact about the utilization of spoils of 27 temples in the construction of the nearby Masjid in the epigraph mentioned there. If he had demolished a Hindu structure, he would have definitely mentioned it with proud. Why didn't he pull down the entire structure? Was there something to prevent him from doing so when Delhi was under his custody?
The proponents of the Hindu origin theory argue that the panels containing the Naskh inscriptions were originally Hindu sculptured panels, which were subsequently defaced and inscribed with the Naskh characters. Some of the stones of the nearby mosque may fit this description.
There are firm archeological evidence to prove that the concept of Minars existed in several Muslim countries prior to and during the period the Qutb Minar was constructed. The minaret of the mosque of Ibn Tulun, Cairo; Peer-e-Alamdar tower, Damghan; Chihil Dukhtaran minaret, Isfahan; Semnan minaret; Barsian minaret, Isfahan; Sarban minaret, Isfahan; Gar minaret, Isfahan; Sava minaret, Iran; Vabkent minaret, Bukhara; Uzgen minaret, Kyrgyzstan; Kalyan minaret, Bukhara; Kutlug Timur minaret, Turkmenistan are some of them.
How Come There is No Inscription Regarding the Founder?
Major Smith's Contribution:


The Minar was seriously injured in the earthquake of 1803. Firoz Shah's cupola was thrown down. Some of the balustrades were shaken loose and the main entrance doorway collapsed. The British Engineer Major Smith repaired it in 1828 at a cost of Rs. 17,000 [with a further charge of more than Rs. 5,000 for clearing the ruins around the minar].
Major Smith was responsible for the Gothic balustrades which now surround the balconies. He also built a Bengali chattri crowning the Minar. See the drawing above.
Major Smith's repairs, however received lot of criticism. "The restorations of the entrance doorway, of the balustrades, and of the cupola, are altogether out of keeping with the rest of the pillar", states Cunningham.
During this repair work, the fallen inscribed slabs over the entrance doorway were put back in wrong order. [Nobody has reported that the other side of it has images of Hindu gods or goddesses].
The whole of the entrance doorway is Smith's own design. Major Smith records that, "the former rude and fractured entrance door of the base of the column (minar) was repaired and improved with new mouldings, frieze and repair of the inscription tablet".
Anyway, let's thank the British Government for the repair works.
The Bengali chattri built by Major Smith was removed in 1848 by the order of Lord Hardinge, then Governor-General of India. Known as Smith's Folly, this chattri is now placed near the Minar.
The Archeology Department carried out more renovations over time in 1920, 1944-49, 1971-72 to fix bulges, cracks as well as for strengthening of the foundation.
Reference:
Archaeological Survey of India, Vol. 1 By Cunningham Alexander
The World Heritage Complex of the Qutub By R. Balasubramaniam
R Nath - Concept of the Qutub Minar - Islamic Culture Vol 49 (1975)
Y. K. Bukhari - Visnudhvaja or Qutb Minar - Annals of the Bhandarkar Oriental Research Institute, Vol XLV (1964)
Ved Parkash - The Qutb Minar from Contemporary and Near Contemporary Sources - Proceedings of the Indian History Congress Vol. 26, PART II (1964)
Sengupta, R - The Qutb Minar: Strengthening the Foundations - Purātattva - Volume 10
Share
Post a Comment
Labels#Delhi Sultans, #Monuments
Newer
Older