Posted onAugust 27, 2019
Tipu Sultan (Tippoo Saib), known as the tiger of Mysore was the most powerful enemy of the British in India. As an article on thehindu.com says, No other Indian ruler captured the imagination of the average Britisher at home, as much as that of Tipu Sultan. There were tales of mythical proportions in circulation in England about his valour and merciless acts of tortures inflicted on the captured British soldiers. It is said that British moms used to threaten their weeping babies with the 'arrival of Tipu' to silence them.

British artists painted important events of Tipu's life, since his defeat in the 3rd Anglo-Mysore war (1792) till his death in the 4th Anglo-Mysore war in 1799: 'The Reception of the Mysorean Hostage Princes by Marquis Cornwallis'; 'Tippoo Saib's Two Sons taking Leave of their Mother'; 'Tipu Sahib taking Leave of his Children'; 'Tipu Sultan's Two Sons Delivered up to Lord Cornwallis'; 'The Delivery of the Definitive Treaty by the Hostage Princes to Lord Cornwallis'; 'Return of Tippoo Saib's Two Sons to Their Mother'; 'The Storming of Seringapatam'; 'The Last Effort and Fall of Tipu Sultan'; 'Sir David Baird Discovering the Body of Tipu Sahib'; 'The Body of Tippo Sultaun Recognised by His Family' and the list goes on. These paintings were exhibited in several London halls. 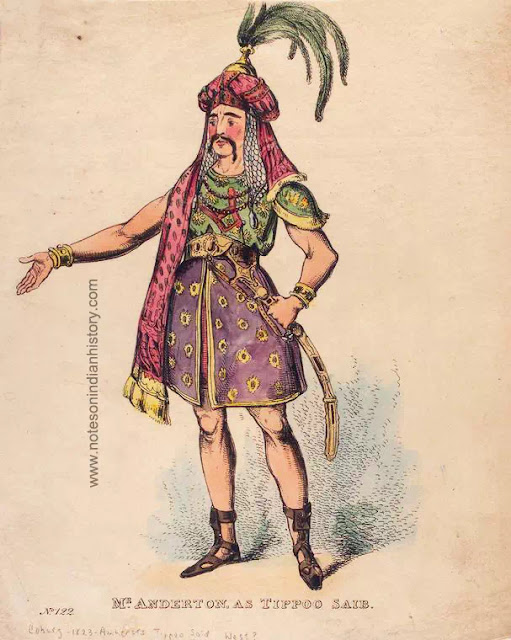 From 1791 to 1829, several dramatic portrayals of Tipu Sultan appeared in various theaters of London. Following are some of them:


Tippoo Saib or British Valour in India (1791): The first in this series was Mark Lonsdale's pantomime ballet 'Tippoo Saib or British Valour in India'. It included 'a battle dance and a representation of an English and Indian Grand Martial Procession. This play had been put on at the Theater Royal, Covent Garden, on 1 June 1791, 'when only the sketchiest news of beginning of the 3rd Mysore war arrived from India'. The show was performed for a second time on 7 June. Mr. Follett played Tipu Sultan, Mr. Byrne an English Colonel, Miss Francis the Colonel's lady and Mr. Bannister composed an Indian war song.

Tippoo Sultan, or the Siege of Bangalore (1792): Staged at Astley's Amphitheater on 9 April 1792, this play was all about Cornwallis's assault on Bangalore in February & March of the year 1791. Advertisements refer to it as 'A Compiled, Whimsical, Oriental, Tragic, Comic, Pantomimical Sketch'. The Madras Courier of 13th December, 1792 quotes the following critique about this production:

"Had Astley resided all his life in Mysore and its neighbouring countries, he could not be better informed than he is respecting the manners, customs etc. of Tippoo Saib, his court and subjects. Tippoo in the first act, is discovered seated at a table, surrounded by his nobility dressed in the Turkish manner, but instead of turbans they all appear in Armenian caps enriched with plumes and feathers. His guards, who are seen at a distance, are clothed in tiger's skins and armed with halberds, resembling very much the Beef Eaters in the Tower.

In the second Act the manners and customs of the people are introduced. The High Priest of the Sun, who comes forward attended by numbers of priests of various orders, having made his invocation, he retires to commence the sacrifices of the day, the victims for which are seen bound, with wreathes of flowers round their necks, and consist of Hares, Rams and Hogs.

In the back part of the stage there are a number of people wrestling and others running races, a party of beautiful virgins urging them to victory and to the prize. Others are dancing, leaping, skating etc. etc."

Tippoo Saib's Two Sons (1792): This play staged on 20 August, 1792 at Astley's. The play is divided into three parts: the first, introduces "the affecting, pleasing and interesting" departure of Tipu's sons from their father at the gates of Srirangapatna; the second offers a view of the fort and presents the reception of the hostage princes; and the third, "an oriental military festival" which took place on that occasion.


[In 1799, the fall of Srirangapatna was celebrated immediately by a production at Sadler's Wells. Possibly Tippoo Saib; or, The Plains of Hindostan.] 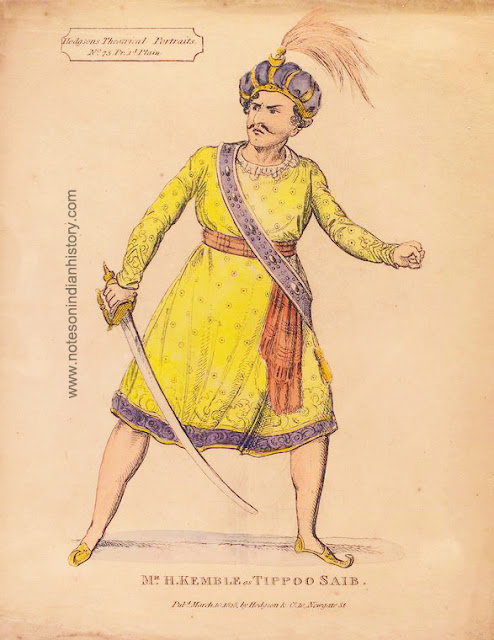 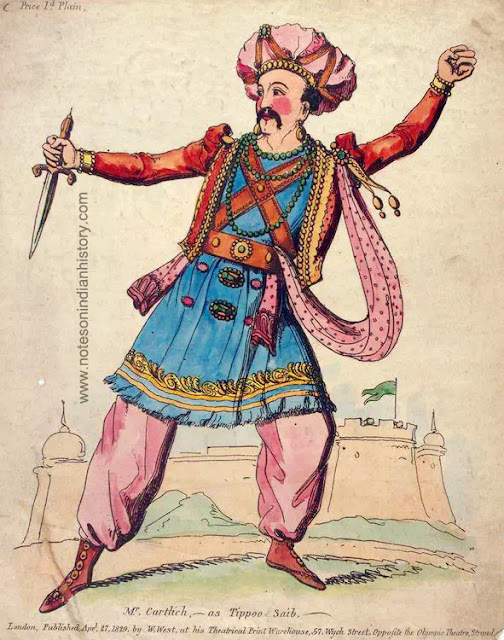 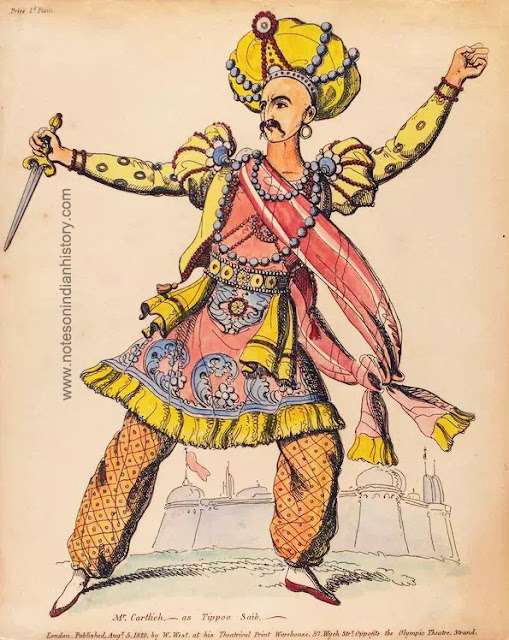